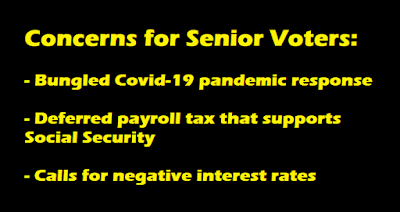 Downplaying the risks of Covid-19

Risk for contracting Covid-19 increases with age and for those with underlying health conditions that are common among senior citizens, reports the Centers for Disease Control.  About 80 percent of all Covid-19 deaths in the United States have been among adults 65 years and older.

Yet Trump downplayed the pandemic. “I wanted to always play it down," the president said in a March interview with journalist Bob Woodward. "I still like playing it down, because I don't want to create a panic."

By September, while campaigning in Ohio, Trump noted: "It affects elderly people, elderly people with heart problems, if they have other problems, that's what it really affects, that's it. In some states thousands of people - nobody young - below the age of 18, like nobody -  they have a strong immune system - who knows?... Take your hat off to the young because they have a hell of an immune system. It affects virtually nobody.” 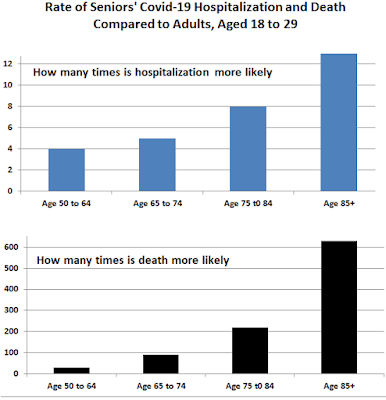 The payroll tax funds Social Security and Medicare, by deducting 6.2 percent from employee wages and likewise taxing employers 6.2 percent for a total of 12.4 percent.

In August, Trump signed an executive order deferring that tax for workers earning less than $4,000 biweekly from September through December – part of a multi-pronged effort to stimulate the economy stalled by the pandemic. The order targets more than 80 percent of the US workforce. The plan would be to collect that same tax in 2021 but the Trump dangled the possibility that those payments will never reach Social Security coffers: "If victorious on November 3rd, I plan to forgive these taxes and make permanent cuts to the payroll tax.”

Many major employers have declined to participate and continue to collect and pay the tax to the Internal Revenue Service.

Meanwhile, the Trump administration is scrambling to send out a letter to 39 million Medicare beneficiaries, promising a $200 card for purchasing drugs. “The $200 cards — which would resemble credit cards, would need to be used at pharmacies and could be branded with a reference to Trump himself — would be paid for by tapping Medicare's trust fund,” reports Politico.

The card may not subdue concerns with the average Social Security monthly benefit for retired workers at $1514. 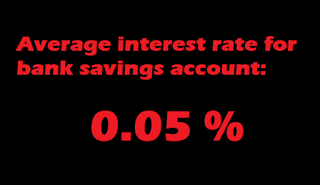 The president has repeatedly called for negative rates, that is, creating an easy-money policy with banks essentially paying borrowers to take out loans.

The average rate is less than 1 percent, reports the Federal Deposit Insurance Corporation.

“The prospect of lower interest rates may put retirees in a bind: Contend with less growth on their ‘safe money’ or consider taking more equity risk,” reports CNBC.

The president may have irritated the wrong group of people. Exit polls in 2015 showed Trump won with 52 percent support from voters aged 65 and older. A CNN poll suggests that this year Trump will be lucky to crack that group by 40 percent. 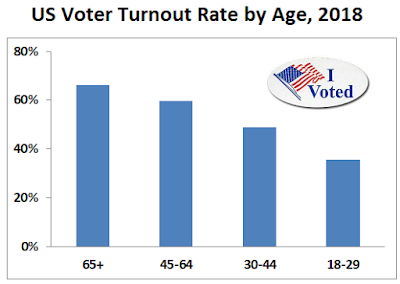