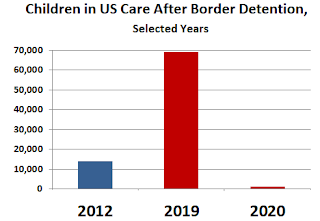 During the final 2020 presidential debate, Joe Biden blasted Donald Trump for family-separation policies and government’s inability to reunite hundreds of children with their parents after a failure to keep records and contact details. Trump responded that the facilities were clean: “Let me say this. They worked it out, we brought reporters and everything. They are so well taken care of. They're in facilities that were so clean…”

The US government spends hundreds of millions of dollars on caring for children who should not have been separated from family members. “In fiscal year 2019, the latest year for which complete data are available, ORR awarded grants totaling over $1.8 billion to organizations providing shelter and other services to these children,” reports the US Government Accountability Office. “The numbers of these referrals have fluctuated over time, but increased substantially from almost 14,000 in fiscal year 2012 to more than 69,000 in fiscal year 2019.”

Current grant announcements specify that facilities must be state licensed or eligible to receive a license with 75 days of the grant award. A review suggested that most did not include such licenses in their applications, and some facilities struggled to meet the 75-day deadline. The review also found in March 2018 that one grantee had placed a child in a home with foster parents under investigation for sexual abuse of another unaccompanied child. “In fiscal years 2018 and 2019, ORR awarded grants to approximately 14 facilities that were unable to serve children for 12 or more months because they remained unlicensed. In addition, ORR did not provide any documentation that staff conducted a review of past performance for the nearly 70 percent of applicants that previously held ORR grants. Without addressing these issues, ORR risks awarding grants to organizations that cannot obtain a state license or that have a history of poor performance.”

Of 23 licensing agencies that provide licensing, 14 found deficiencies in at least one of the facilities in their state during fiscal years 2018 or 2019 – some of which were significant. Problems included administrative issues to threats to children’s health and safety.

Federal standards for reporting and inspections are lacking. “HHS monitors these facilities to ensure they're keeping children safe, among other things. But it hasn't met its own targets for how frequently it visits facilities, and doesn't consistently share information with state agencies that license them,” reports GAO. “Our recommendations include that HHS develop plans to meet its monitoring goals and share information with state agencies.”

Awarding grants to facilities with a history of poor performance puts children at risk. Separating children from their parents without cause, such as criminal violations, is a waste of taxpayer money.

Meanwhile, apprehension on the US southern border are on the rise. 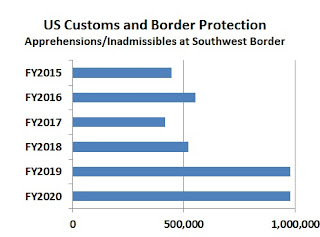 Source: GAO and US Customs and Border Protection.