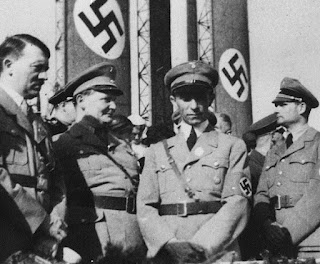 Brunhilde Pomsel, now 105, recalls her position as one of five secretaries for Joseph Goebbels during 30 hours of conversation that serve as as the basis for the film A German Life. Goebbels was the minister of propaganda for Nazi Germany from 1933 to 1945, and Pomsel worked for him during the last three years.  Connolly interviewed Pomsel for The Guardian.


Pomsel insists that she did not know about the extent of the Holocaust or her employer's own role in the genocide until after April 30, 1945 when Hitler along with Goebbels and others killed themselves. She served five years in prison for her wartime role.

Connolly describes Pomsel as unrepentant: "As she holds court, gesticulating wildly, with a broad grin on her face, it seems as if she even takes something restorative from her insistence that she simply acted the same way as most other Germans. 'Those people nowadays who say they would have stood up against the Nazis – I believe they are sincere in meaning that, but believe me, most of them wouldn’t have.' After the rise of the Nazi party, 'the whole country was as if under a kind of a spell, she insists. 'I could open myself up to the accusations that I wasn’t interested in politics but the truth is, the idealism of youth might easily have led to you having your neck broken.'"

Of course, many in Germany and occupied countries sacrificed their lives by resisting the Nazis.

Pomsel's dismissal of modern critics of the Nazis is juxtaposed with a memory of being handed a case file on Sophie Scholl, a student activist with the White Rose resistance movement. Pomsel recalls being ordered to lock the file away without reading it, and she describes being "quite pleased with myself... that my keenness to honour that trust was stronger than curiosity to open that file."

Scholl, enrolled in the University of Munich in biology and philosophy, was a liberal thinker who like other members of her family questioned Nazi policies. Her brother had been arrested in 1937. A few years later Scholl joined her brother and a small group of students to distribute leaflets warning that Hitler and the Nazis were leading Germany into an "abyss" of immorality and war. 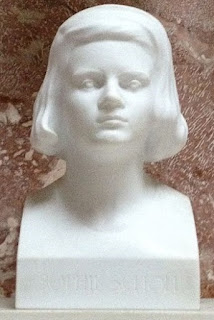 Later, Scholl was reported to have said: "Somebody, after all, had to make a start." She and other members of the White Rose resistance group were arrested in February 1943. They were convicted on February 22 and beheaded that same day.


The profile of Pomsel offers a glimpse into the varying power of resistance, duty, trust, discipline, and curiosity.  Germany was divided before 1933, and the Nazi Party came into power with less than a majority. The Nazis were intent on masking their motivations and many of their activities while destroying resistance by any means necessary.


Those who long to control others try to squash activism, warnings or investigations that might present an opposing view. They cannot endure simple questions let alone democratic procedures. They deny and resist the full range of observations and evidence, excluding any that fail to support their views. Curiosity is a trigger to caring about other humans and the world and a basis of explorations in science and art. "The important thing is not to stop questioning," said Albert Einstein, as quoted in Life Magazine in 1955. "Curiosity has its own reason for existing."

Stay vigilantly curious about what others try to hide or deny.

Photos, all courtesy of Wikimedia Commons: "Nazi Hierarchy" of Adolf Hitler, Goering, Goebbels, and Hess; an unrelated typing class in the 1930s; and a bust of Sophie Scholl by sculptor Wolfgang Eckert by RyanHulin.