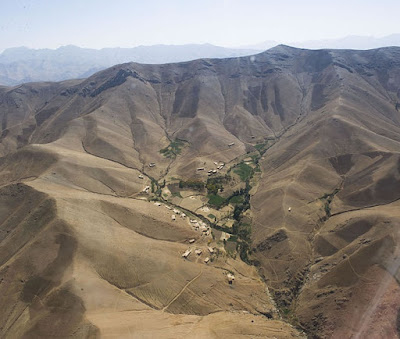 "The views of the scholars – some of the strongest yet expressed on climate from within the Muslim community – are contained in a draft declaration on climate change to be launched officially at a major Islamic symposium in Istanbul in mid-August," reports Kieran Cooke for Climate News Network. "The draft declaration has been compiled by the Islamic Foundation for Ecology and Environmental Sciences, a UK-based charity focused on environmental protection and the management of natural resources. The declaration mirrors many of the themes contained in a recent encyclical issued by Pope Francis, the head of the Catholic Church."

Criticism is directed at the world's most advanced economies as well as oil-producing countries like Saudi Arabia.  The declaration includes quotes from the Koran, such as 16:65:  "And Allah has sent down water from the cloud and therewith given life to the earth after its death; most surely there is a sign in this for a people who would listen."

Regardless of faith, all people share a common home and should have an interest in protecting and caring for the Earth. There is no escaping climate change. "The urgent challenge to protect our common home includes a concern to bring the whole human family together to seek a sustainable and integral development, for we know that things can change,” the pope writes in his encyclical. “Humanity still has the ability to work together in building our common home.”

The pope mixes a scolding with eloquent respect for the Earth's land and waters: "The earth, our home, is beginning to look more and more like an immense pile of filth. In many parts of the planet, the elderly lament that once beautiful landscapes are now covered with rubbish. Industrial waste and chemical products utilized in cities and agricultural areas can lead to bioaccumulation in the organisms of the local population, even when levels of toxins in those places are low. Frequently no measures are taken until after people’s health has been irreversibly affected."

Researchers are studying climate change and producing models to forecast impacts. Models for the United States are specific and the National Climate Assessment offers projects for each region of the country.

Challenges for a underdeveloped nation like Afghanistan include a lack of baseline data, lack of meteorological stations in most parts, low literacy rates and a lack of trained personnel, explains Ghulam Mohd Malikyar in "The Impacts of Climate Change for Afghanistan."  Key hazards for the country include droughts, abrupt heavy rainfall, flooding doing to fast thaws in snow and ice, rising temperatures, heavy winds, severe storms and desertification, he writes, adding that all this disrupts agriculture. Other challenges include a "Lack of linkage with regional and international climate change networks" and "Low levels of awareness of the current and potential impacts of climate change" as well as "Limited analytical capability."

The country is working to promote awareness of future variability and potential for extreme events, as well as the need for sustainable development.

These trends along with the unnerving signs of climate change - volatile temperatures that destroy crops, dust storms, drought, water shortages, and even unusual snow - run throughout Allure of Deceit and Fear of Beauty. The villagers of Laashekoh do not have the benefit of weather reports, and must take each day as it comes, and the land means everything to Parsaa, the protagonist of Allure of Deceit. From Allure:

....Paul declined. He had to visit other village and expected snowfall.
"Surely not yet," Parsaa said. "The air is not that cold."
Paul smiled. "You will see over the next day... temperatures will plunge before tomorrow evening."

As noted the prologue notes in Fear: "We live in a land where extremes reign." Climate change is a security and economic issue, no longer easy to shove to the back of our minds. Modern literature increasingly reflects these concerns.

Photo of small village nestled in the mountains of southern Afghanistan, courtesy of Mark Ray, USACE, and Wikimedia Commons.