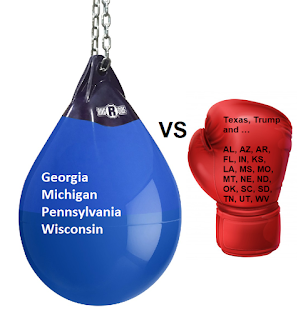 Texas, unhappy that Donald Trump lost the 2020 presidential election, filed a lawsuit with the US Supreme Court demanding that legislatures in four swing states disregard voter wishes and choose another slate of electors. Eighteen other states along with Donald Trump have joined the lawsuit.

Texas Attorney General Ken Paxton claims the states “exploited the Covid-19 pandemic” and made unconstitutional changes to their laws before the 2020 election.

Paxton who describes the election results as “tainted” holds a tainted background himself – facing charges “that he persuaded investors to buy stock in a technology firm without disclosing that he would be compensated,” reports the Texas Tribune.

The US Supreme Court ordered Georgia, Michigan, Pennsylvania and Wisconsin to respond by 3 pm today. 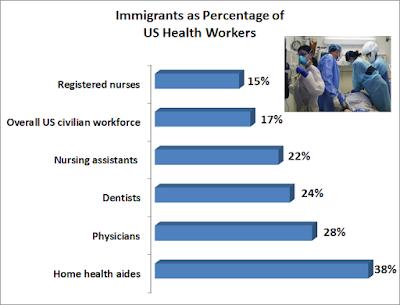 Donald Trump is expected to sign an executive order to ensure that vaccinating US citizens against Covid-19 takes priority over efforts to assist other countries, including close allies.

Failing to protect foreign workers will fail to protect the United States, a country of immigrants. Even before Covid-19 strained US health care systems, hefty percentages of health are workers were immigrants, reports Migration Information Source.

"Hospitals in at least 25 states are critically short of nurses, doctors, and other staff as coronavirus cases surge across the United States, according to the industry’s trade association and a tally conducted by STAT," reports Olivia Goldhill for STAT. "The situation has gotten so bad that in some places, severely ill patients have been transferred hundreds of miles for an available bed — from Texas to Arizona, and from central Missouri to Iowa."

The Centers for Disease Control and Prevention developed strategies to mitigate staffing shortages. And with a limited supply, the CDC recommended groups considered for early vaccination:

- workers in essential and critical industries

During the summer, the Trump administration arranged for enough vaccine from Pfizer to inoculate 50 million Americans, but declined an offer to reserve additional doses. The company now has commitments to other countries, reports the New York Times. “Any additional doses beyond the 100 million are subject to a separate and mutually-acceptable agreement. The company is not able to comment on any confidential discussions that may be taking place with the U.S. government,” noted a Pfizer statement.

But as the old saying goes, beggars should not be choosy. Of course, Joe Biden, to be inaugurated as next US president as of January 20, 2021, can write his own executive orders.

Data source for graph is the Migration Information Source and the photo is from Jae C. Hong of Associated Press.