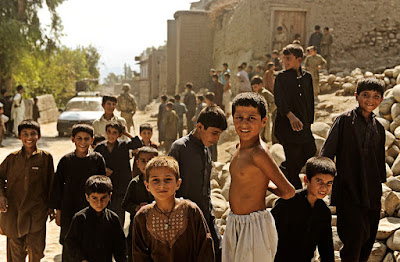 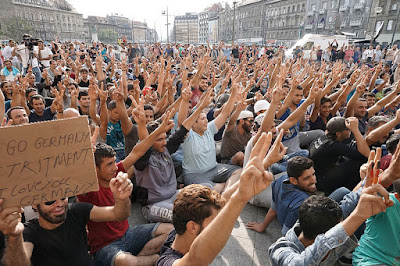 The Islamic State does not abide by the Geneva Convention or any other code of conduct for war, adding to the challenge of the fight against terrorists who go after soft targets and behead prisoners of war and civilians.

One CIA estimate puts the Islamic State manpower at 31,500. By comparison, the United Nations estimates "that 7.6 million people are internally displaced" and "more than half of the country’s pre-war population of 23 million is in need of urgent humanitarian assistance, whether they still remain in the country or have escaped across the borders," reports Mercy Corps.

Countries including the United States, Jordan, France and many others target Islamic State sites with air strikes. But air strikes are imprecise. Hitting civilians is inevitable, especially in battling an opponent that lacks a code of conduct.

Reporting for AP, Vivian Salama and Zeina Karam report on the tragic inevitability as described by  Airwars, a group that monitors the war against the Islamic State and tracks civilian casualties.

"The coalition's war against ISIL has inevitably caused civilian casualties, certainly far more than the two deaths Centcom presently admits to," notes [the Airwars website]. " Yet it's also clear that in this same period, many more civilians have been killed by Syrian and Iraqi government forces, by Islamic State and by various rebel and militia groups operating on both sides of the border."

Some context: Totals of civilian deaths caused by the Islamic State are notably lacking.

Also, monitoring groups suggest that the Syrian government and Assad regime are responsible for many more deaths than the Islamic State - an estimated 250,000 during the four-year civil war in Syria. "Between January and July [2015], Assad’s military and pro-government militias killed 7,894 people, while the Islamic State killed 1,131, according to the Syrian Network for Human Rights, a monitoring group based in Britain," reports Hugh Naylor for the Washington Post.

Such casualty counts are likely low, with reports of mass graves found in areas near Sinjar, overtaken by Iraqi Kurdish forces: One is reported to contain 78 women between the ages of 40 and 80 years old and the other had bodies of about 50 men, both likely Yazidis. Authorities anticipate finding other grave sites, reports Nabih Bulos for the Los Angeles Times.

After the attacks in Paris that killed more than 125 and injured more than 300, the international community will likely join with Russia, and targeting the Islamic State will take priority over removal of Assad as Syria's leader.

Many contend that ground troops are required for thorough defeat of the Islamic State, but citizens throughout the West resist sending their soldiers and expect Muslim nations in the Middle East to defend their territory - though it must be noted that the conflict in Syria is highly complex as the United States supports Kurdish rebels and Turkey, a member of NATO and US ally, targets those same fighters described as successful against the Islamic State. Russia, too, targets rebels who oppose the Assad regime.

An imperfect solution for the Syrian refugee crisis, one grounded in gender and age bias: conduct screenings and open borders for women with children under age 15 and adults older than age 50.A tough for the international community.

Terrorist attacks on civilian targets in Europe, North America and beyond are anticipated, too.  The Islamic State is a disturbing problem global in scale.

"Attacks by Islamic State terrorists in Syria, Iraq and beyond pose consequences for refugees fleeing communities throughout the Middle East and moderate Muslims," YaleGlobal reminds. "Globalization of communications, travel and more ensures that regarding violence, hatred, terrorism as routine for the region with a population of more than 200 million can threaten global security."