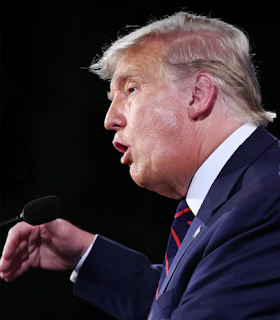 The first question in the first 2020 presidential debate focused on Donald Trump’s effort to place a third justice on the US Supreme Court – and the topic quickly turned to health care and Republican efforts to end the Affordable Care Act.

The Affordable Care Act, aiming to increase preventive care and curb the rising costs of health care, imposed regulations on the industry. The Trump administration and a group of states have asked the US Supreme Court to strike down the Affordable Care with arguments scheduled for November 10, a week after the election. Trump hopes to have his nominee on the court by then.  “The case centers on Republicans’ move to use the 2017 tax overhaul to nix the law’s penalty for most Americans who don’t get health coverage,” reports Todd Ruger for Roll Call. “The Trump administration and the Republican-led states argue that move made the mandate to buy insurance unconstitutional.”

Ruger raises the possibility that the court will resist wiping out the entire law even if it finds that a small sliver is unconstitutional. Trump and the Republicans who oppose the law suggest the mandate is central to the Affordable Care Act – and that the entire law should be scrapped.

As was emphasized during an early exchange in the first presidential debate, the administration has no substitute health plan waiting in the wings.

Moderator Chris Wallace: You have promised to repeal and replace Obamacare, but you have never in these four years come up with a comprehensive plan to replace Obamacare…
President Trump: Listen, listen … of course, we have…  I got rid of the individual mandate… excuse me, we got rid of the individual mandate, which was a big chunk of Obamacare…
Wallace: That is not a comprehensive plan.
Trump: That is absolutely a big thing…that was the worst part of Obamacare.
Wallace: I didn’t ask, sir…
Trump: Chris, that was the worst part of Obamacare.
Wallace: Let me ask my question.
Trump: Well, I’ll ask Joe. The individual mandate was the most unpopular aspect of Obamacare.
Wallace: Mr. President...
Trump: I got rid of it and we will protect people with per-existing conditions...
Wallace: Mr .President, I’m the moderator of this debate and I would like you to let me ask my question and then you can answer.
Trump: Go ahead.

That exchange of about 150 words lasted 35 seconds, about twice the pace of that for the average US speaker. The speed, tone and many interruptions reflect why the debate was so painful to follow.

Studies suggest that people judge individual intelligence based on one's voice and how fast one speaks - though "Not too fast, of course, or they won’t understand a word you’re saying," reports Ian Lee for Lifehack. "Nevertheless, faster speakers are perceived to be more confident..." 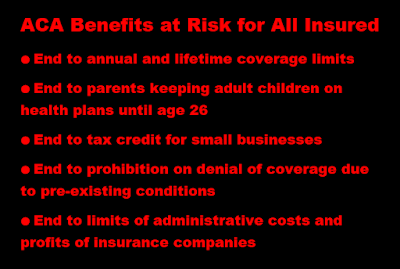 Those benefits apply to far more than the than the 23 million Americans who would otherwise be uninsured and would also hurt Americans who have employee-sponsored insurance, including: 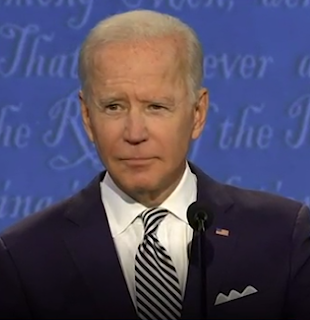 Health care is a business in the United States and represents about 18 percent of the economy. Companies make money on patients, and the careers of thousands of doctors, nurses, pharmacists, insurers and many more workers in the health care field depend on the system, too.

All is not lost and analysts expect the US Supreme Court – even with an additional conservative justice to replace the late Ruth Bader Ginsburg – to support the law.  “Constitutional litigation is not a game of gotcha against Congress, where litigants can ride a discrete constitutional flaw in a statute to take down the whole, otherwise constitutional statute,” wrote Justice Brett Kavanaugh in the majority opinion on another aspect of the case in 2015.

With Joe Biden leading in most of the swing states, incumbent Donald Trump is clearly desperate, indicating that he may resist leaving office if his campaign deems the voting to be unfair. A pattern emerges, though – especially troubling as the country continues to wrestle with the Covid-19 pandemic:  Trump consistently blasts voting by mail for blue states, but offers no complaints about such procedures in red states.

Analysts have expressed concern that some partisan officials may point to close races and disputes as a reason for not relying on each state’s popular vote for choosing electors who will then cast deciding votes through the Electoral College.

“The US constitution gives state legislatures the authority to appoint the 538 electors to the electoral college who ultimately elect the president,” reports Sam Levine for the Guardian. “States have long used the winner of the popular vote to determine who gets the electoral votes in their states, but Republicans anonymously told the Atlantic the campaign has discussed the possibility of using delays in the vote count as a basis to ask Republican-controlled legislatures to appoint their own electors, regardless of the final vote tally.”

All eyes are on swing states – Arizona, Florida, Iowa, Michigan, Nevada, North Carolina, Ohio, Pennsylvania and Wisconsin. A problem for Biden and the Democrats is that Republicans control legislatures in eight of the nine key swing states. 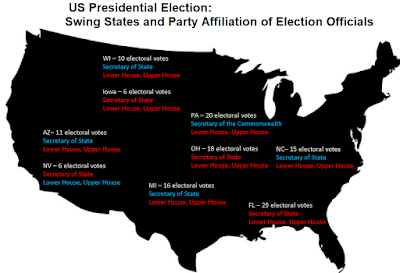 The secretary of state is the lead election official in most states; Democrat fill the role in five of the swing states while Republicans serve in four. The country is placing its trust in election officials throughout the country. Members of the National Association of Secretaries of State have approved and reaffirmed a resolution to “ensure that elections are run in a fair and non-artisan manner so that all voters, regardless of political affiliation, are well-served” and together “strive to create a system of checks and balances that ensures the fair and equal application of election laws and procedures."

A heavy turnout is key to success for a democratic election, determining the winner of this crucial 2020 presidential race. But record voting, by mail or by person, could also result in delays for counting and announcing results.

Plenty of observers will be on hand, and states, including Michigan, have detailed rules for challengers and poll-watchers.

Data source, Ballotpedia and the Guardian; US image, FreeVectors 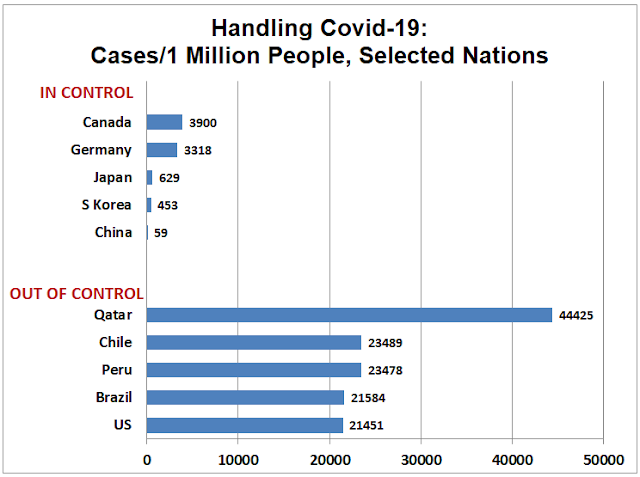 It was well documented in early April: Nations that acted swiftly to contain the spread of Covid-19 could lift economic restrictions more quickly.

And most individuals  can exercise great control over preventing the illness for themselves, their loved ones and anyone they contact. Preventive measures include wearing masks and practicing social distancing, at least 6 feet especially when indoors along with avoiding crowds and staying home when displaying symptoms including coughing or fever.

Again, this was well documented in mid-March after governments in East Asia responded swiftly with discipline to the virus. 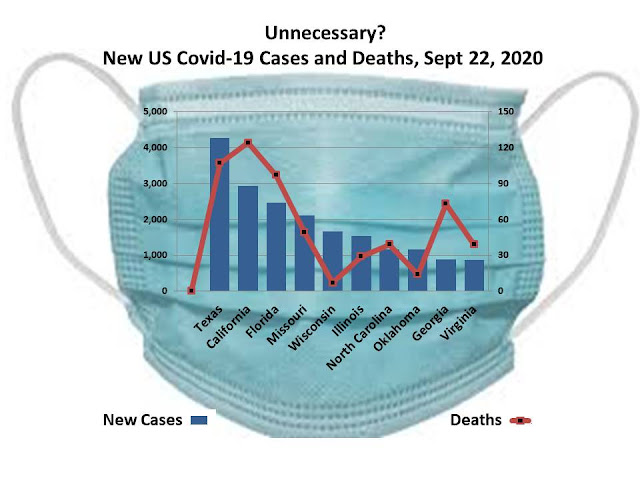 The United States has less than 5 percent of the world's population and represents more than 20 percent of global Covid-19 cases and 20 percent of deaths. Analysts offer a mix of reasons for the country's high Covid-19 rates: impatience and, in some cases, desperation to open businesses and return to normal; failure of leaders to allow public health officials to establish timelines for reopening; a yearning quick fixes including vaccines and medicines; assumptions that healthy, comfortable and young Americans could not possibly succumb; inattention to lag times after infection and exponential rise; and politicization of the simple precaution of wearing a mask along with a lack of self-discipline or consideration for the elderly and others who might be vulnerable.

Ed Yong writes for the Atlantic:

"Many Americans trusted intuition to help guide them through this disaster. They grabbed onto whatever solution was most prominent in the moment, and bounced from one (often false) hope to the next. They saw the actions that individual people were taking, and blamed and shamed their neighbors. They lapsed into magical thinking, and believed that the world would return to normal within months. Following these impulses was simpler than navigating a web of solutions, staring down broken systems, and accepting that the pandemic would rage for at least a year.

"These conceptual errors were not egregious lies or conspiracy theories, but they were still dangerous. They manifested again and again, distorting the debate around whether to stay at home, wear masks, or open colleges. They prevented citizens from grasping the scope of the crisis and pushed leaders toward bad policies."

Denial and political polarization have disrupted the Covid-19 response, this despite the many future unknowns anyone infected, even those who are asymptomatic, as warned by researchers since the pandemic's beginning.

The pandemic will continue throughout the winter, and a new normal is unlikely before spring of 2021. Still, as other countries demonstrated earlier this year, individuals hold immense power over preventing the rapid and deadly spread of this disease. Hundreds of new cases and deaths each day are simply unacceptable and unnecessary.

Source for data in graphs: Worldometers