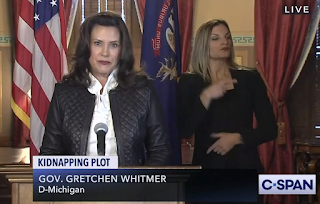 Let’s get this straight – since March, a majority of Michiganders have supported Governor Gretchen Whitmer’s efforts to control the Covid-19 pandemic including mandatory masks and a stay-at-home order. She is viewed favorably by 51 percent of likely voters, suggests one recent survey, and in April, another poll suggested that 57 percent of state residents approved of her handling of the Covid-19 pandemic.

Even so, the federal government has charged six people with plotting to abduct or kill Whitmer. Seven others were charged with plotting to overturn the government in Lansing. “In early 2020, the FBI became aware through social media that a group of individuals were discussing the violent overthrow of certain government and law-enforcement components,” reports an affidavit unsealed today. “The group decided they needed to increase their numbers and encouraged each other to talk to their neighbors and spread their message.” As a result, informants became involved. A confidential informant became involved and secretly recorded sessions.

May 5 and 14: Armed protests at state capitol in Lansing.

July 27, Grand Rapids: Discuss getting a realtor to help them find the exact location of the governor’s vacation home.

Aug 9, Munith: Tactical training and group call that discussed assessing the governor’s primary home, kidnapping her. One said, "Have one person go to her house. Knock on the door and when she answers it just cap her….”

Aug 18, group call: Discuss surveillance of vacation home and escape from scene by boat on lake.

Aug 29: Conducted surveillance of the vacation home (location will not be identified here) and checked on locations of nearest police.

Sept 12-13, Luther, MI: Meeting and practice to detonate IED and plan another nighttime surveillance of the vacation home; three cars drive by the home and record their observations; they inspect nearby bridge to place IED. During that drive, one of the accused notes: “I can see several states takin’ their f------ tyrants.” On return ride, they discuss killing the governor and destroying the vacation home. They plan a final practice session in late October.

Sept 14, encrypted chat: The group decides the last week in October is too late for a final training exercise in order to complete the abduction before the November election.

Oct 2, encrypted chat: One member of the group purchases a taser and the group plans to meet Oct 7 to pay for explosives and tactical gear.

The FBI and Michigan investigation and arrests came soon after US Senator Mike Lee of Utah sends out a tweet: “Democracy isn’t the objective; liberty, peace, and prospefity are. We want the human condition to flourish. Rank democracy can thwart that.”

Rank democracy threatens Republican power. Republicans are struggling with their policy ideas and control with minority rule. They control the Senate, gaining seats in 2018, even though Democrats led Republicans by more than 12 million votes in Senate races that year. In 2016, Donald Trump won the presidency even though Hillary Clinton won 3 million more votes. In turn, Senate Republicans’ refusal to review or vote on former President Barack Obama’s judicial nominations allowed Donald Trump to “pack the courts.”