Donald Trump, now diagnosed with Covid-19, claims to have done a great job on protecting Americans from the pandemic and touts his partial ban on travel from China imposed in January.

Former Vice President Joe Biden, during the first 2020 presidential candidate debate, blasted Trump for letting the Covid-19 pandemic get out of hand, resulting in more than 7.5 million cases and more than 200,000 dead. Trump retorted: “And if you were here, it wouldn’t be 200, it would be 2 million people because you were very late on the draw. You didn’t want me to ban China, which was heavily infected. You didn’t want me to ban Europe.”

Vice President Mike Pence repeated the claim during the vice-presidential candidate debate: Trump “suspended all travel from China, the second-largest economy in the world. Joe Biden opposed that decision, he said it was xenophobic and hysterical.”

The evidence does not support such claims, and Trump’s approach to the pandemic is flawed due to “fixation error,” or the  tendency, as identified by the aviation and medical industries, to approach problem-solving by seeking and blaming a “single, ‘root’ cause.”  As one medical journal puts it, “Fixation errors occur when the practitioner concentrates solely upon a single aspect of a case to the detriment of other more relevant aspects.”

Let’s take a closer at the US ban on travel from China and the timing. The United States diagnosed its first Covid-19 case on January 20.

Days later, by January 23, China cut off Wuhan, a city of 11 million people and the epicenter of the virus, from the rest of the country.

The Trump administration imposed its restrictions for travelers from China on January 31, when the country then reported about 10,000 confirmed Covid-19 cases, with 114 more scattered in 22 other countries.

Section 1 of Trump's executive order limited US entry of all aliens who were physically present within China, excluding Hong Kong and Macau, during the previous 14 days. Section 2 offered a long list of exceptions – US citizens and lawful residents and their family members, air and sea crew members, foreign government officials or “any alien whose entry would not pose a significant risk of introducing, transmitting, or spreading the virus, as determined by the CDC Director, or his designee.” 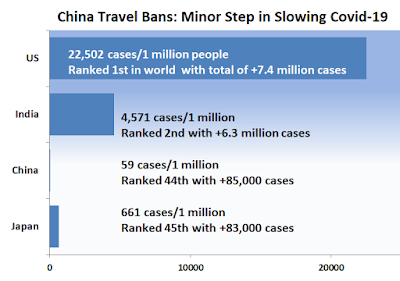 Dozens of countries banned travelers from China – including the United States, India and Japan – yet that measure alone did not guarantee success in containing the virus. The United States and India now rank first and second as countries with the most Covid-19 cases, more than 7 million cases and 6 million, respectively.

On the other hand, Japan, ranking 45th, quickly contained the virus with masks and social distancing and has recorded 83,000 cases. Japan issued a targeted travel ban for foreign travelers from regions in China with high rates about six weeks later.  Japan plans to gradually lift overseas travel alerts starting this month, starting with nations with low infection rates, and negotiates with China on business travel.

Then, there are Cambodia and Taiwan, ranking 186th and 173rd.  Cambodia initially declined to ban travelers from China, and instead targeted those from the United States and four European nations along with Iran while continuing to welcome Chinese visitors. Taiwan instituted a ban on foreign travel six weeks after the US ban.

More than nine months into the pandemic, China reports a total of 85,000 cases.

Containing the virus requires more than travel bans. Governments that successfully contained the spread of Covid-19 - and since reopened their economies – relied on a multi-prong approach that includes honest, consistent messaging based on latest health research combined with physical distancing, crowd limits, regular testing  and masks in public places.

"A systems approach to safety does not mean staff can simply deny responsibility and 'blame the system,'" argues Gaylene Heard. Instead, caregivers must take a big-picture approach in handling complex medical problems.

Containing the virus requires more than travel bans. Governments that successfully contained the spread of Covid-19 - and since reopened their economies – relied on a multi-prong approach that includes honest, consistent messaging based on latest health research combined with physical distancing, crowd limits, regular testing  and masks in public places.