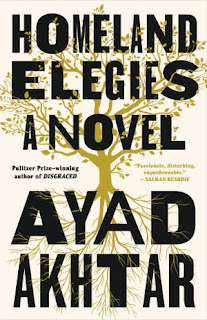 The novel Homeland Elegies demonstrates how one individual’s patriotism, nationalism or even confusion over ideology might be viewed as extremism and terrorism by those of another culture.

Criticism is how individuals discover new paths to improvement. Yet, criticizing one's country - any country and, perhaps, especially the United States - prompts resentment and all types of fury. Opinions are hastily dispensed in the United States, and even the most sincere or thoughtful comments can trigger angry reactions from even close, well educated family members or trusted friends. One enters dangerous territory by revealing feelings in a divided society.

The plot of Homeland Elegies is presented as a novel, but reads like confessional memoir. Despite the mix of genres, the reader trusts that the narrator did not merely change a few details, but employed imagination and connections in the stories about family and friends that reflect American materialism and angst of recent decades. This country is a place where money reigns as "our supreme defining value." Deep in the book, the narrator who shares a name with author Ayad Akhtar warns readers about trust: "point of view is always shaped by desire; if some part of you doesn't trust your desire, then you better not trust the picture of the world it's giving you."

The narrator, the child of Pakistani immigrants, begins by describing his father's medical practice and a meeting with Donald Trump in the early 1990s to offer an opinion on a potential heart condition. During this period, the father binges on debt, declares bankruptcy and eventually builds a successful practice. As a result of that chance meeting, the father is a fervent supporter of Trump's 2016 outlandish presidential campaign. Few Americans expected the man could win: "The improbable saga of this campaign, its whiplash reversals, its perverse pleasures - didn't a story this insane require an ending commensurate with the madness? The writer in me knew that stories are made of movement, not morality; demand conclusion not consonance; and often conjure into being the very terrors they are written to wish away."

The same could be said about the improbable stories of the family in this novel. The book details the allure of choices and excess for both father and son, including debt, speculative investments, sex, alcohol and gambling - activities prohibited in Pakistan's Islamic society.

The book, like Fear of Beauty and Allure of Deceit, details how major economic and political events shape individual reactions and social policy. These events include the Iranian Revolution, a series of financial crises and, of course, the 9/11 attacks which posed a dilemma for the many Muslims, including those most successful and Americanized. Some Muslims, like a character in a play written by the narrator, remain guilt-ridden about feeling a momentary hint of pride about the attacks, but perhaps that was more about the new attention directed toward the culture and society's yearning for understanding rather than the actual event.

The narrator describes his own quest for attention as a writer and playwright and coming to the realization that the source of his life's work was in part "the pursuit of something as simple as my mother's gaze, a gaze she gave happily to books. Was it a coincidence I, too, had sought the comfort of books as a child? Wasn't I seeking her attention? Isn't that what I really wanted as I would sidle up to her warm body on the couch as she read, a book of my own in hand?"

The connection between an unseemly yearning for attention tied to tragedy and the cherished memory of a mother and child reading together is jarring – and the book teems with such contrasts. I remember my own mother reading to me before bedtime on our living room sofa, and I repeated this ritual with my own son when he was young. I remember the texture of each sofa, the low light from lamps illuminating our pages, the warm skin in soft pajamas next to me. We didn't just read but talked about books, character motivation and some of the most difficult moments. There can be no more secure place in this world for posing questions and sharing opinions.

Akhtar is eloquent in describing his caution in answering questions from strangers after 9/11 and hiw awkward attempts to avoid suspicion: "if all this sounds somewhat paranoid, I am happy for you. Clearly you have not been beset by daily worries of being perceived - and therefore treated - as a foe of the republic rather than a member of it." He is subtle in how he compares the forces contributing to the rise of Trump and far-right extremism with the extremism in Pakistan: "...when you feed a monster, it grows. When it attacks you - because it always will - you have only yourself to blame."

Like the narrator, we may bristle at others' questions and criticism. Still, we should follow the narrator's lead as detailed on the final pages of the book, by hearing others out and trying to understand. We may not agree, but we can respond by telling our stories, again and again.