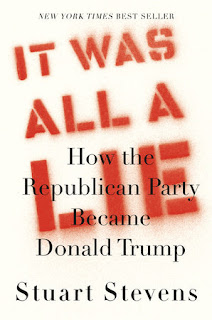 Donald Trump delivered thousands of errors, exaggerations and outright delusions during his four years as president, and political strategist Stuart Stevens blames the Republican Party for going along. "Republicans are linked to a vast life-support system of lies, terrified that the truth will unplug the machine,” he writes. “American history has never seen a party so unified in perpetuating a massive fraud.” Trump is “the logical conclusion of what the Republican Party became over the last fifty or so years, a natural product of the seeds of race, self-deception, and anger that became the essence of the Republican Party.”

Stevens worked for Republican candidates, but his book It Was All a Lie will delight Democrats.

The Republican Party rejects dissent, critical thinking and questions, eroding personal responsibility and courage while weakening party leadership. Groveling for money from lobbyists supporting policies rejected by a majority of US voters also weakens party leadership: Special interest groups are like terrorists, explains Stevens, as “they test for weakness and exploit fear.”

The party shelters its most compliant politicians and turns against those who dare to think for themselves, such as Justin Amash, the first Republican congressman to call for Trump’s impeachment. Cracks in Republican unity have widened with Trump’s refusal to concede to President Joe Biden in the 2020 race and his role in the January 6 US Capitol riots. The party balks at allowing members to vote their conscience, and state Republican officials swiftly condemned the ten Republican congressional representatives and seven senators who voted in favor of Trump’s second impeachment and conviction. The quest for ironclad unity – with no room for critical thinking or individual reflection – is treacherous as the party repeatedly embraces problematic policies and candidates. Stevens blasts the party for endorsing candidates like Roy Moore of Alabama, despite multiple sexual misconduct allegations, while ignoring effective, popular, moderate governors in blue states like Larry Hogan of Maryland, Phil Scott of Vermont and Charlie Baker of Massachusetts.

Republicans lose major voting blocs such as black Americans, maintains Stevens, not because of how they communicate but on how they govern once elected: “The fact that the Republican establishment is so invested in the myth that their problems are a matter of language is revealing and self-damning. “

If anything, Republicans are superbly skilled at communicating and framing issues, as long pointed out by George Lakoff, cognitive scientist and author of Don’t Think of an Elephant. “There’s a language war here that Republicans have been winning for decades,” Stevens writes. Republican political leaders label programs meant for the poor as “welfare,” yet reserve terms like “tax breaks” and “incentives” for agriculture subsidies and other corporate handouts. The real description, he suggests, should be “corporate blackmail.”

The 1987 FCC decision to stop enforcing the fairness doctrine, allowing constant partisan attacks, “supercharged conservative media into a billion-dollar industry,” according to Stevens. The left lacks the equivalent of the right-wing media strongholds – instead cooperating with leading media outlets and research institutions that strive to question, test, criticize and debate. “Republicans have built a political ecosphere that thrives on deceit and lies,” Stevens writes. “It is an industrialized sort of deceit that is unique to the Republican Party.” In a civil society, he explains, a “shared reality, that truth, is the core energy that drives the functioning of society,” yet Republicans find it easier to maintain that their opponents lack “the correct information on which to base decision.”

Amid shrinking support, Republicans hunt for ways to reduce support for Democrats:

Misinformation – Hypocrisy and lying go hand in hand. Republicans have long campaigned on “fiscal conservatism” and the need to tame US debt. Stevens points to Trump, who instead of decreasing national debt, as promised increased it by $2 trillion in two years. That was before the Covid-19 pandemic. Republican candidates refuse to admit the need to increased taxes in addressing the massive debt load, and Stevens points out how a “simpleminded conspiracy of silence that is a central tenet of Republican politics” will force future generations to shoulder the burden.

Discourage the opposition – Black Americans steadfastly support Democrats, and no Republican presidential candidate has received more than 15 percent of black votes since 1964. A 1971White House memorandum conceded “there was little Richard Nixon could do to attract black voters” – representing about 11 percent of US registered voters – “so the focus should be on utilizing black voters’ support of Democrats to alienate white voters.” So Republicans insist that city leaders are incompetent and Democrats are elites who have no interest in the concerns of black communities.

Divide opponents – The major parties are gleeful when they can introduce issues or third-party candidates that siphon votes from the other side. For example, news reports suggested that some state Republican Party officials supported singer Kanye West’s efforts to run for president.

Fuel culture wars – Republicans depend on support from the religious right even though speechwriter Michael Gerson, writing for the Atlantic in 2018 and quoted by Stevens, points to the Trump presidency as a disaster for norms:  “It has coarsened our culture, given permission for bullying, complicated the moral formation of children, undermined standards of public integrity, and encouraged cynicism about the political enterprise.” But that support is dwindling, too. Polls by the Pew Research Center suggest that evangelical Protestants totaled about 25 percent and Catholics 21 percent in 2014, down from 26.3 percent and 23.9 percent in 2007, respectively. Those describing themselves as non-affiliated increased from 16.1 percent in 2007, 22.8 percent in 2014 and 26 percent in 2019.

Republicans’ intense desire for lockstep unity, combined with a stubborn refusal to admit Trump’s loss in the 2020 presidential campaign, has weakened the party. Numerous Republican officials hope to run for president and have little choice but to court Trump’s most fervent supporters. Expect the former president to delay anointing a successor, keeping would-be candidates guessing while extracting promises and favors along the way.

The book is direct, witty and a fast read, yet rambles in parts, skipping about decades. Notably, Stevens dodges analyzing the messaging around a key issue dividing Democrats and Republicans - abortion. He briefly mentions the topic five times, mostly referring to candidates’ policy positions.

Stevens goes beyond expressing scorn and fury over Republican methods in which he participated and calls for party members to reassess and revive individual personal responsibility and integrity. Republicans failed a moral test by twice promoting Trump’s candidacy and Stevens argues that the party must adapt to a changing society: “history tells us that once those in power legitimize hate, it is difficult to manage.”

To win without gerrymandering, vote suppression and misinformation, Republicans must serve an increasingly diverse America. But to suggest that the party under its current leadership might rise to the challenge, “would be a lie," Stevens concludes, "and there have been too many lies for too long.”

Instead, Republicans turn on one another with greater ferocity.