History offers a reminder that candidates for the US House of Representatives and the US Senate do not always ride on the coattails of the presidential candidate, and 2020 was no different.

President-elect Joe Biden handily won the popular vote, yet as was the case for Democratic candidates John F. Kennedy and Bill Clinton and Republican candidates George H.W Bush, George W. Bush and Donald Trump, he lost some seats in the House of Representatives. The exact count is still unknown with not all races yet called. 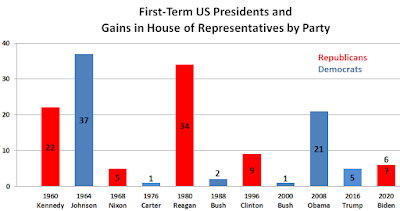 Biden gained at least one Senate seat, with two more seats yet to be decided in January by voters in Georgia. Democratic candidates Lyndon B. Johnson and Barack Obama along with Republicans Richard Nixon and Ronald Regain also gained seats. Kennedy, Carter, the two Bushes and Trump lost seats.

Democrats blamed bad polling, the media and extremism among their ranks for the losses. Speaker of the House Nancy Pelosi disagreed with one congresswoman who called the election a failure: "I do disagree that it was a failure. We won the House. And we won the presidency."

Many voters in Nebraska and Maine split tickets to vote for Biden along with Republican candidates for Senate and the House - a repudiation of Donald Trump.