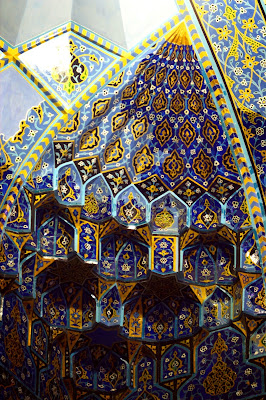 Photo of Blue Mosque in Iran, courtesy of Wikimedia Commons.
No comments:

By now, protesters around American embassies in Egypt, Libya, Yemen, should realize the film "The Innocence of Muslims" was at best a lame project and at worst a deliberate conspiracy to stir anger at the United States and perhaps even influence the US election.

Reports that there is no film, just a trailer, and that actors report saying one set of words and the actual online release relying the offensive dubbing could point to the latter intent. Early reports that an Israeli was behind the project add to suspicions.

Terrorists know they can draw a comic, make a film, write a story and goad angry protesters and violence. The protests display not devotion, but a willingness to be pawns.

A better, more lasting and targeted revenge? Picking up a pen and drafting poetry, literature and scripts that show the cultural relevance of Islam.

Violence does not show respect for a religion.

And I just came across this from Deepa Kumar, writing for McClatchy: "At the end of the day, the far right in one country has more in common with the far right in other countries than with any other segment of the world's population. The vast majority of ordinary people are sensible and nonviolent."
No comments: