The Linda Norgrove Foundation, based in Scotland, will partner with Canadian Women for Women in Afghanistan to develop literacy programs for girls and women and expand the Afghan library network.

"Some 840 women will receive literacy classes and more than 20,000 people are expected to use the community libraries being set up by Afghanistan Reads, a community literacy project supported by the Norgrove Foundation," reports David Ross for HeraldScotland.com.

USAID has contributed funds for the programs. Norgrove, an aidworker in Afghanistan, was kidnapped and later killed during a failed rescue attempt.

John Norgrove, her father, maintains that education is "fundamental to the future of Afghanistan."

Photo of Afghan girl reading from a comic book distributed by Afghan soldiers, courtesy of  US Sgt. Daniel P. Shook and Wikimedia Commons.
No comments: 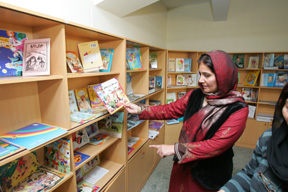 Libraries let children explore and dream. Yet such places are rare in the developing world, and war in countries like Afghanistan essentially ruined such institutions. The number of libraries in Afghanistan has grown in recent years, and yet these still remain inaccessible for most rural children in a country where half the population is under age 18.

Atifa R. Rawan, an Afghan native and librarian at the University of Arizona, has been recognized for her efforts to rebuild and protect the nation's academic libraries, reported La Monica Everett-Haynes of UA News. She has worked with Afghanistan specialists like Nancy Hatch Dupree and the Afghanistan Centre at Kabul University to preserve materials. The program has since expanded to provide training and other support, and The motto of the Louis and Nancy Hatch Dupree Foundation is "Rebuilding Afghanistan, One Book at a Time."

Other more informal libraries are opening in schools around the country, reports the US Agency for International Development:

Many communities and public schools in Afghanistan do not have a library. Students are limited to grade level books provided by the Ministry of Education.

To improve access to quality education services in Afghanistan, a USAID project has disseminated educational materials to rural communities to improve literacy and promote a culture of reading in Afghanistan. Through the project, about 200 libraries have been established and more than 100,000 books distributed around the country. Each library is initially provided with 500 books that are approved by the Ministry of Education and available in both Dari and Pashto.

A blog on Rebuilding the Libraries of Afghanistan also reports progress: Before the civil war in the 1990s, Kabul had six libraries and six provincial libraries, most destroyed and damaged. Since 2001, the country has opened new libraries: "There are now 10 branch libraries in Kabul (including Afghanistan's only prison library at Pul-e-Charkhi Prison) and a further 50 provincial library branches.  Kabul Public library also has a mobile library van which services 12 outlying districts of Kabul."

Funding, corruption and challenges from those who resent education remain issues. The Rebuilding blog continues: "As in many developing countries, the priority for most Afghan librarians at this point in time is simply to be able to organise and manage books and documents efficiently and serve their clientele with a minimum of materials and technology."

William Frej, a former mission director, recalls a rural village in Bamyan Province, amid the Hindu-Kush mountains, as reported by Robert Sauers for USAID Frontlines. The village had a USAID program: "I was struck at this completely isolated village, and there were both boys and girls in a classroom that had a trained teacher - learning math, learning reading skills, learning English," he said, adding that USAID and its implementing partner on the project were the only development groups who had ever visited that particular village."

By empowering individuals, libraries and literacy provide economic strength as well as local and national security.