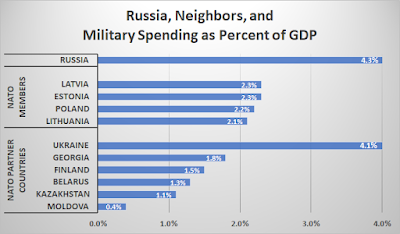 Russia's president, rattled by NATO and nostalgic for the Soviet Union and Cold War, invaded Ukraine after the latter's leadership rejected a pledge to not join NATO.  Russia has also threatened others. “President Vladimir Putin has demanded NATO withdraw all outside forces from the region and commit to Sweden and Finland never being allowed to join,” reports Edward Lucas for Foreign Policy.

Putin's use of brute force in Ukraine provides new incentive for Finland, Sweden and Ukraine to pursue NATO membership.

NATO leaders met on February 25, calling on Russia to stop the “senseless war” – and to “immediately cease its assault, withdraw all its forces from Ukraine, and turn back to the path of dialogue and turn away from aggression.”

NATO’s 30 allies contribute to the budget on an agreed cost-share formula based on gross national income – “This is the principle of common funding, and demonstrates burden-sharing in action.”

The US State Department describes US cooperation with NATO’s three Baltic State members – Estonia, Latvia and Lithuania. The countries bordering Russia have shouldered the security responsibility, reports Lucas. “The Baltic states and Poland play their part too: Their defense budgets exceed the minimum 2 percent of GDP mandated by NATO. These funds are spent wisely, including on modern weaponry that could at least slow, and thus help deter, a Russian attack.”

NATO is supporting Ukraine against Russia’s aggression: “Thousands of anti-tank weapons, hundreds of air-defence missiles and thousands of small arms and ammunition stocks are being sent to Ukraine. Allies are also providing millions of euros worth of financial assistance and humanitarian aid, including medical supplies to help Ukrainian forces.”

Global military spending as a percentage of GDP has been in decline since the end of the Cold War, but Russia's current leadership is intent on reversing that trend. 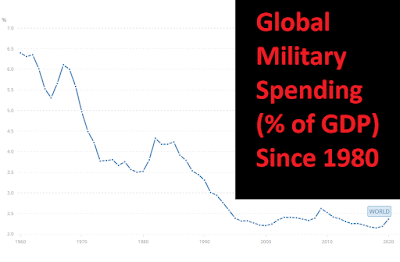 So far, the Ukraine military, aided by citizens under siege are slowing the Russian invasion. NATO members – along with many other countries – are imposing harsh economic sanctions on Russia that could plunge the country into a depression as long as President Vladimr Putin is in charge.

Data on military spending for Russia and selected neighbors from the World Bank.