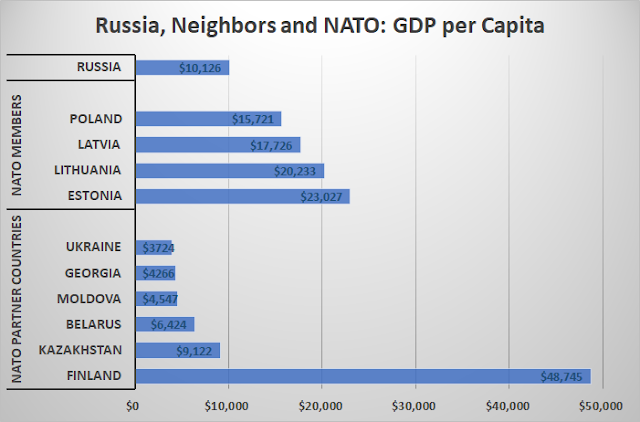 Russia shares land borders with 14 nations, along with maritime borders with another five. Russia threatened Ukraine over its interest in joining NATO. After Ukraine refused to capitulate, Russia invaded.
Russian President Vladimir Putin offered a deranged speech on February 24 outlining his complaints with Ukraine, as transcribed by the New York Times:
It is a fact that over the past 30 years we have been patiently trying to come to an agreement with the leading NATO countries regarding the principles of equal and indivisible security in Europe. In response to our proposals, we invariably faced either cynical deception and lies or attempts at pressure and blackmail, while the North Atlantic alliance continued to expand despite our protests and concerns....
For our country, it is a matter of life and death, a matter of our historical future as a nation....
The leading NATO countries are supporting the far-right nationalists and neo-Nazis in Ukraine, those who will never forgive the people of Crimea and Sevastopol for freely making a choice to reunite with Russia....
To this end, we will seek to demilitarize and denazify Ukraine, as well as bring to trial those who perpetrated numerous bloody crimes against civilians, including against citizens of the Russian Federation.
Today, Russian shelled residential and commercial areas of Kharkiv, Ukraine's second largest city, killing civilians who by their resistance demonstrate no desire to be linked with Russia. More than 60 percent of Kharkiv people are of Russian heritage. So, Putin has essentially ordered strikes on fellow Russians.
Ironically, Ukraine, like Belarus and even Russia, are already so-called NATO "Partners for Peace."  Russia has since threatened another neighbor, Finland, about joining NATO as a full member country.  When Russian troops entered Ukraine's Crimea in 2014 and took control, there was no resistance. NATO did not lift a finger, and polls since suggested that Crimeans, while dissatisfied with corruption and the economy, are generally pleased with Russian rule.
The treaty alliance explains that NATO membership is open to “any other European state in a position to further the principles of this Treaty and to contribute to the security of the North Atlantic area.”

Data on GDP per capita is from the World Bank.