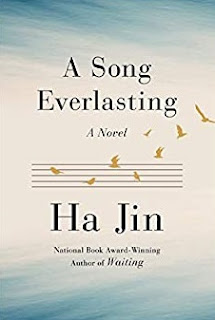 A Song Everlasting by Ha Jin tells the story of an accomplished singer who angers the Chinese Communist Party and relocates to the United States where he performs occasionally for low wages and struggles for a green card while taking on odd jobs of tutoring students and laboring with a construction crew. His new life requires separation from his wife and daughter, flexibility and humbleness. Still, Tian hopes to find artistic freedom and hopes for his daughter to attend a US college.

The haunting and eloquent book may move too slowly for some readers as Tian compares his career and life in China versus that in the United States, exploring the multiple meanings of freedom when intertwined with comfort, trust, security, responsibility as well as the quest for a meaningful life.

Early on, Tian claims to have no interest in politics and hopes that his superiors might forgive him and plead for his return. Instead, he learns the party has a long reach through the diaspora in the United States, intent on ostracizing him if they cannot keep him under their control on their terms. And a good friend points out, “Freedom is not just a personal choice – it’s also social conditions.”

For Tian, separated from his family, freedom comes to mean solitude and isolation. Chinese government contacts argue that freedom is worthless if one must go hungry and live apart from loved ones, and Tian agrees that “freedom is a different kind of suffering away from tyranny.” He admits that freedom can be “frightening and paralyzing,” taking time to get used to, yet he worries that “cultural pragmatism” limits Chinese people’s visions and pursuits. He misses his celebrity status and the many associated favors while also embracing anonymity. He eventually determines that “solitude is a path to freedom, for which you must accept everything that happens to you, including hunger, disease, and even death. You’re supposed to be responsible for your own existence, body and soul.” At another point, he notes: “To be left alone – that is the essence of freedom.”

Over the course of seven years, he wonders if the separation and suffering are worthwhile, if the sacrifices are really necessary and justified, and for Tian the answer remains a steadfast yes, as he recalls words of his father-in-law – that courage is “manifested in the way one lived and worked every day.” By the end, Tian is a fervent and thoughtful advocate of democracy, suggesting: “It was time to remind people that democracy must not retreat any further, or the Chinese government would export its system of digital autocracy to control and dominate the world.”

Freedom of thought is a fundamental human right, nurtured by formal education and self-education. The American Library Association points out that "censorship, ignorance, and manipulation are the tools of tyrants and profiteers" and true justice and freedom depend on the constant appreciation and exercise of such rights.