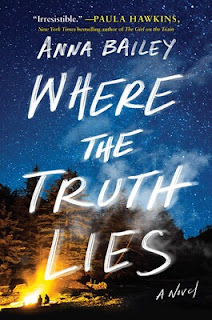 The novel Where the Truth Lies from British author Anna Bailey demonstrates how a community or individual can use religion as a weapon to control or belittle others. The book is set in small rural Colorado town, where a father regularly abuses his three children, insisting that God made him the way he is and God “understands why I’ve done the things I’ve done.” Of course, that argument does not apply to others who may choose to live differently, whether that might be homosexuality or immigration.

For the fundamentalist father, his way is God’s way, the only way, and a cycle of cruelty, humiliation, guilt, anger and shame ensues. Expectations of rote forgiveness mock Christian principles. Teenagers observing and subjected to such abuse lash out against the unreasonable controls and expectations with self-abuse – shutting down with self-loathing, substance abuse, sexual debasement. Hurting one’s own body “feels like power, the way a mad king might slaughter his people, just to prove he can.” Resorting to extreme behavior is perhaps a last-ditch effort for finding someone who might care. If that savior does not emerge, then a life with so much anger and control is not worth living anyway.

Children trapped in such situations, expected to honor insane parents, cannot help but question whether God even exists. In this book, young Jude protests that "God wouldn’t –" and his brother Noah responds: “This has nothing to do with God, you idiot. God doesn’t do anything, He just whispers in people’s ears that they’re worth jack shit, and they pray and pray hoping He’ll stop, but He doesn’t, and in the end they just go crazy. That’s all God does, He makes people go crazy, so get that into your head and grow up!”

Most adults in the small town express sympathy but then shrug and look the other way. The worst of it is when family members turn on one another, pointing out transgressions, some true and others false, finding scapegoats for the tyrant to attack. The goal is to deflect attention away from their own wrongdoings or create horrific chaos so that others outside the family might intercede.

The book's title, Where the Truth Lies, reflects the multiple meanings of the verb “to lie” as detailed by Merriam-Wesbster: to engage in falsehoods, to sleep or remain motionless, to remain inactive or in hiding, to bed with, to have an effect, to remain still, to belong or to be neglected. Of course, there is but one meaning for truth - what happened to Abigail Blake and why.

Bailey’s novel supports the notion that an outsider can sort through carefully crafted myths, history and expectations and reveal our true natures.

Self-deception, the embracing of false beliefs despite evidence to the contrary, leads to horrific behaviors and crimes. Self-deception is both morally wrong and morally dangerous, individually and collectively. Those who engage in self-deception, evading evidence to avoid knowledge and truth about real problems swirling in their midst, cannot be trusted on any topic.

Collective self-deception is especially dangerous, and yet the growing trend, fueled by the internet and social media, “has received scant direct philosophical attention as compared with its individual counterpart,” notes the Stanford Encyclopedia of Philosophy. The self-deceived turn to groups who reinforce their beliefs and most frightening: “Compared to its solitary counterpart, self-deception within a collective is both easier to foster and more difficult to escape, being abetted by the self-deceptive efforts of others within the group.”