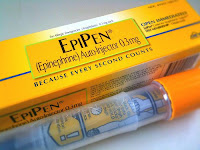 Health care is not a normal business. The demand side - an expectation for quality of life or survival - is just too skewed and at such a disadvantage to the supply side.

The price hike in EpiPens, used by many to control severe allergic reactions, exposes the many problems of running health care like a business. Buyouts in the pharmaceutical industry and fierce competition allow companies to hike prices and gouge desperate customers. Heather Bresch, CEO of Mylan, the company that makes the device, complains that she is frustrated and that "Our health care system is in crisis."

The system is in crisis due to greed and selfishness of a few - those who seek profit from selling life-saving health care, medicines and treatments at any cost.

Charity is not the answer.  "On Thursday the pharmaceutical company announced it would give a $300 coupon to lower- and middle-income customers who have to pay for the device out of pocket because they lack health coverage or have a high-deductible insurance plan (previously, it offered a $100 discount card)," reports Jordan Weissmann for Slate. "Giving patients a 50 percent break after increasing prices 500 percent is not exactly a sweeping act of charity, even if it does help some families erase their entire co-pays."

Charity does not necessarily provide comprehensive coverage. Donors may be generous and kind, but observers can never be certain because other motivations may be involved including tax write-offs, careers, reputations, celebrity status and more.


Prices vary around the world. US customers pay more than $600 for an EpiPen package. "Canadians pay around $120 (Canadian) for a single auto-injector, with the price varying somewhat, depending on an individual pharmacy’s dispensing fee," reports the Globe and Mail. The pack was less than $100 a decade ago.

Corporations are being put on notice. US consumers are becoming less docile and conducting more price comparisons.

"I'm running a business" is the hardhearted claim from Mylan's CEO on CNBC. No one should be outraged. She merely spoke the truth about the status of health care in the United States. She stands as exhibit A that some people work in the health care field, or rather industry, for the wrong reasons.

Allure of Deceit is about a large charity and the motivations for providing health care in the developing world.