The Koran and debate 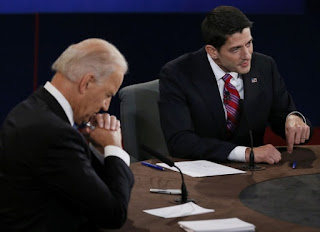 Audiences in the US can expect to see more references to the Koran in many, many media forms, as I noted in a guest blog "The Koran upstages Bible in debate," for the Washington Post:

"Online translations and interpretations from American universities and beyond are plentiful... Because of that curiosity, along with the intense conflicts over faith in the modern world and the passion of adherents, audiences can expect to see more references to the Koran in politics and media discussions – and even as a central theme in films, novels and art."

The guest blog noted that the vice presidential debate made mention of the Koran and not the Bible.

Moderator Martha Raddatz posed the question to Congressman Paul Ryan:  "I want to ask you about - the Romney campaign talks a lot about no apologies. He has a book called No Apologies. Should the US have apologized for Americans burning Korans in Afghanistan? Should the US apologize for US Marines urinating on Taliban corpses?"

Rayan's reply:  "Oh, gosh, yes. Urinating on Taliban corpses? What we should not apologize for..."

Ryan: "What - what we should not be apologizing for are standing up for our values. What we should not be doing is saying to the Egyptian people, while Mubarak is cracking down on them, that he's a good guy and, in the next week, say he ought to go. What we should not be doing is rejecting claims for - for calls for more security in our barracks, in our Marine - we need Marines in Benghazi when the commander on the ground says we need more forces for security. There were requests for extra security; those requests were not honored. Look, this was the anniversary of 9/11. It was Libya, a country we knew we had Al Qaida cells there, as we know Al Qaida and its affiliates are on the rise in Northern Africa. And we did not give our ambassador in Benghazi a Marine detachment? Of course there's an investigation, so we can make sure that this never happens again, but when it comes to speaking up for our values, we should not apologize for those. Here's the problem. Look at all the various issues out there, and it's unraveling before our eyes. The vice president talks about sanctions on Iran. They got - we've had four..."

The conversation then moved to Iran.

Some argue that Ryan specifically dodged endorsing apologies for mistreatment of the Koran - "finessed" and "pander" in the words of Robert Dreyfuss for The Nation. I do not agree, and believe his response, "Gosh, yes" covered both examples. He simply repeated one of the two choices, certainly the act regarded as more heinous in American culture. The Koran burning by Marines was undoubtedly an honest mistake.


The debate did not mention the Bible, though certainly great attention was devoted to Catholic doctrine and the candidates' descriptions on the role their Catholic faith played in developing their separate personal views on abortion. It's my observation that Catholics tend to lean less heavily on the Bible as a source for guidance than interpretations from the Pope and their own individual consciences.

In the end, my point was that curiosity from others is an honor and should be welcomed: "The forays into studying, discussing, dissecting the Koran will include mistakes and misunderstandings. Artists of all types will test the boundaries. But that curiosity signals the ultimate desire for empathy, respect and desire for connections."