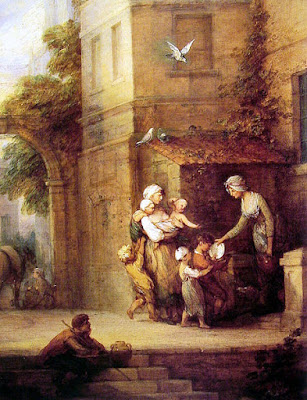 Allure of Deceit is about charity going awry, serving personal agendas and warping incentives. Of course, charities are a tool and so much of their purpose and worth depend on the creator's vision and managers' skills.

The leading candidates in this year's presidential race each have ties to major charities bearing their names. We have commented about the Clinton Foundation, and the Washington Post now investigates the Donald J. Trump Foundation: "Donald Trump spent more than a quarter-million dollars from his charitable foundation to settle lawsuits that involved the billionaire’s for-profit businesses, according to interviews and a review of legal documents," reports David A. Fahrenthold. "Those cases, which together used $258,000 from Trump’s charity, were among four newly documented expenditures in which Trump may have violated laws against 'self-dealing' - which prohibit nonprofit leaders from using charity money to benefit themselves or their businesses."

Essentially, the article claims that donors receive tax deductions on what they give to the foundation and the foundation turns around and uses those funds to settle various business expenses.The funds were also used to purchase portraits of the foundation's namesake. "More broadly, these cases­ also provide new evidence that Trump ran his charity in a way that may have violated U.S. tax law and gone against the moral conventions of philanthropy," Farenthold concludes.

Many charities serve worthy purposes with dedicated staff and scrupulous research into problems and accounting of expenses. The wisest, most caring charities should support an end to tax deductions for charitable contributions because the charlatans are threatening all giving and charitable programs. Ordinary donors are hit with an unending stream of requests by mail and phone for contributions, and it's easy to say no.

With increasing numbers of charities emerging to take advantage of tax write-offs, hundreds of thousands created in the last decade alone, too many tackle problems in flighty and inefficient ways.  Or, they don't tackle problems at all: "for every dollar donated and deducted by wealthy taxpayers paying taxes at a 35 percent marginal tax rate, the US loses 35 cents of potential income tax revenue," even as "the government struggles to provide essential health and education services,"  I wrote in 2011.

The essay contributed to the ideas about charity in Allure of Deceit. A murder victim in Allure of Deceit is a wealthy woman whose research focused on cross-country comparisons of charitable giving versus government spending and efficiency. She did not like how the notion of charitable giving could reinforce inequality: "The origin of the word forgiving was giving and traced how charitable practices over the years implied that recipients were wrongdoers who were weak and deserved no control." The victim's mother-in-law disregards such principles, starting a foundation and using its resources to investigate the reasons behind the murder.

"An open public process, prioritizing projects based on needs, would provide more efficient funding than relying on the whims of a few. Individuals passionate for a particular cause or innovation (or those thrilled to see their family names on a museum, clinic, or university hall) would still give – and should," the 2011 essay concluded.

Some basic services like education and health care are too vital for personal agendas and the scattershot approach. Tax deductions for charitable contributions can't end too soon.

Copy of the painting Charity Relieving Distress by Thomas Gainsborough, 1727 to 1788, courtesy of Wikimedia Commons.
No comments: