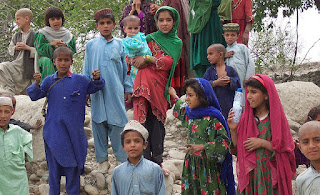 Pakistan has ordered six foreign workers of the charity Save the Children to leave the country. "The aid group had been under suspicion from authorities ever since a doctor accused of assisting the CIA in its search for the al-Qaida leader claimed that Save the Children had introduced him to US intelligence officers," reports Jon Boone for the Guardian.  Pakistanis suggest the workers had "engaged" the doctor who has been charged of setting up a vaccination program to catch Oasma bin Laden.

Save the Children has worked in Pakistan for decades and only six of the 2000 workers in the country are foreign nationals, Boone explains.

The charity issued a statement: "Save the Children is a global organisation and has a zero-tolerance policy for people involved in work that is not humanitarian and does not benefit children and their families. We reiterate our offer to the Pakistani authorities to examine our country office financial records and interview any of our staff concerned with our operation there."

Save the Children strives for transparency and offers a Donor Bill of Rights, that including transparency on mission and finances, ability to ask questions and the expectation "that all relationships with individuals representing organization of interest to the donors will be professional in nature."

Doctor Shakil Afridi, who helped the US pinpoint the location of Osama bin Laden,  is serving a 33-year prison sentence for treason. Pakistan should be very careful calling the Save the Children workers or Dr. Afridi a spy - unless, of course, bin Laden was working for Pakistan in an official capacity.

Photo of a group of children in Khost Province, Afghanistan, courtesy of funbobseye and Wikimedia Commons
No comments: