Moderates in our midst 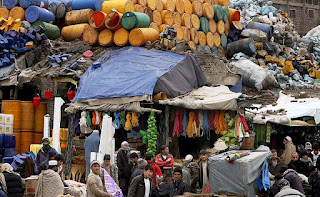 "There are no moderates in Iran," morning show host Joe Scarborough said today. Less than 10 minutes later, he was smart enough to backtrack by noting, "The moderates are not in power."

His first comment rankled. Once a writing instructor, I regularly warned students against using "all," "none," "always," "never." Such words are hyperbole and immediately invite your readers to hunt for the one exception.

But such words are common in television talk shows and newspaper opinion essays. Massouda Jalal wrote an op-ed for The Wall Street Journal in December 2011, entitled "There are no moderate Taliban":  "Seeking to negotiate with an implacable enemy could be seen either as foolish or foresighted. The West obviously sees a deal with the Taliban as essential to its transition, and therefore a pragmatic step. But this faith in negotiations appears to be based on the belief that there exist 'moderate' elements of the Taliban, and that they can be coaxed toward supporting constitutional democracy."

The sentiment was not new, and many lashed out after President Barack Obama suggested during a March 2009 interview with The New York Times that he would seek out and try to work with "moderate elements" of the Taliban to end the war in Afghanistan.

In March 2009,  for Forbes, Tunku Varadarajan struggled for a definition, suggesting it must be "those who'd contemplate an abandonment of their jihad against Western forces in Afghanistan in exchange for some sort of power-sharing arrangement with the government of Hamid Karzai." He continued:

"It is their willingness to do deals, in other words, that makes them moderate, not the essential make-up of their beliefs and culture. That said, if they are willing to set aside their adamantine opposition to the infidel West and its puppet, Karzai, they are clearly less purist in their pursuit of an Islamist society than those who would fight to the finish. That makes them relatively moderate, if you like. Or just plain cynical."

Yes, women and children will suffer the most if Afghanistan can't achieve peace, if the government cannot deliver law and order.

Obama's willingness and the flurry of essays that followed by Varadarajan  and others motivated me to find the exception to no moderates and write Fear of Beauty, about a village with people who want their children to attend school but who also appreciate their traditions, accept harsh penalties for violating those traditions, and do not want their lives to change.

So what to do about diplomacy? What to say to those who scoff at diplomacy?

Diplomacy is a delicate and, too often, time-consuming process. Those who would talk through a problem must study and divide opponents, finding others who may be swayed to end the fighting and pursue peace. Opponents who are ready to think a little differently are there. Women who want to attend school. Taliban supporters who want to engage in trade. Political leaders who want legitimate regional power. Afghanistan could be a case for aid with a schedule of strict, strict, strict conditions on corruption and human rights. And similar conditions should be imposed on other allies, including Pakistan, where a 14-year-old girl was shot by Taliban for advocating education for girls.

Fighting forces opponents to entrench and harden their positions. Trade, diplomacy, education are the enemies to extremism.

The war in Afghanistan has entered its 12th year. I'm not suggesting that the moderates and their supporters can succeed in Afghanistan or Iran - that the extremism can be contained. Moderates struggle in the United States, facing vehement attacks within their own political party and communities because they are even willing to consider working with the other side.

I can only hope that the aim of hyperbolic language about opponents isn't intended to make it easier to launch an attack. Because there are - and I'll avoid saying always! - moderates in our midst.