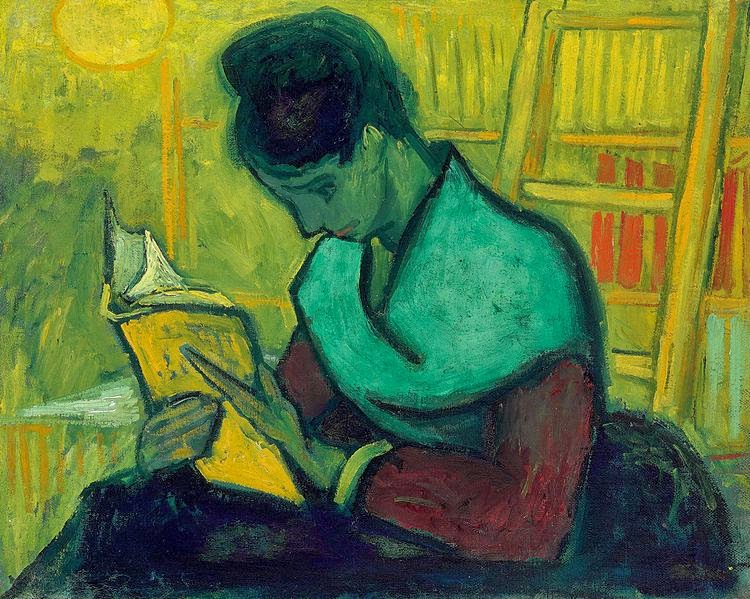 An odd collection of books, a mixture of old and new, can change a person's life. Many novels on the lists of great literature are dated. Some authors aimed for provocation and other works were simply products of their era. Sady Doyle reviewed No Regrets for In These Times. In No Regrets,  women authors describe what they had read or avoided during their youth, and Doyle points to her favorite suggestion from Carla Blumenkranz and notes, "Maybe every woman writer has to create her own 'secret canon,' her own list of essential books, in order to survive the male-dominated cultural definition of 'great literature.'"

Of course, this could apply to others who feel marginalized for any reason. Every person should create his or her own canon of great works, the books that influenced a life.

In Fear of Beauty, an Afghan woman, a new reader, quickly discovers that she does not agree with her husband's interpretation of the Koran. Desperate to figure out why her son died on the night he was supposed to attend school, she must first learn to read. She studies in secret and keeps her observations a secret, but her life is more thoughtful and less routine.

As Doyle points out, any reader is qualified to decide what they need from literature and what literature should be, what influences that individual and what should influence society as a whole.

Interpretations vary. Most of us, like Doyle, can remember hearing an interpretation of a passage that did not mesh with our own. They may speak out or choose to remain quiet.

If  readers are candid and thorough, public reading lists, like Goodreads - simply admitting what we like and don't like and why - can expose our personalities, levels of socialization, character traits, fears, choices, and more. Of course, many readers do not list every book they read, and others tame their criticism. A book that provokes strong, negative reactions can be as influential and powerful as one that invites our praise.

Characters should be imperfect, and to paraphrase Joan Didion, rigid politics and rigid rules have no place in the literary realm.


"The Novel Reader," a painting by Vincent van Gogh, 1888, courtesy of Wikimedia Commons.
No comments:

Afghanistan's success hinges on success for its citizens - all citizens. That is the rationale behind directing foreign aid toward women, as suggested by the July 18 announcement from the U.S. Agency for International Development (USAID) on a new $200 million program.

Yet there's a catch to the Promoting Gender Equality in National Priority Programs: "The five-year plan, called Promote, is expected to increase economic, social, and political participation of women between the ages of 18 and 30 through education, job training, microfinance and credit for female entrepreneurs, and training for policymaking."

The purpose of an age limit for the USAID program is unclear and could contribute to uneven development in a country where resentment already runs high.

Meanwhile, US laws protect USAID employees and contract employees from age or gender discrimination, as outlined in Promote's request for proposals. Likewise, assessment criteria for funding programs, such as those of the United Nations, often encourage inclusiveness. Despite laws and protections, discrimination, particularly age discrimination, can go unchecked and unreported even in the United States because of lack of awareness about laws or embarrassment.

Age discrimination is linked with gender discrimination, suggests the UN Women Coordination Division in its report Between Gender and Aging:

"Inequalities in income, education, and employment across the life cycle expose many women to poverty in old age," the executive summary notes. "As the status of women in many societies is linked to having a husband, widows are particularly vulnerable to poverty." The UN report goes on to report that "older women have not benefited equally from the progress that has made in tackling violence and abuse, often failing to be accounted for in both gender and ageing research and policies" – and suggests that "concerns over the situation of older women have largely been ignored."

To counter the challenges for older women, the UN Women Coordination Division recommends a lifelong approach to education, support for empowerment and priority for "the needs of rural older women in public policy."

The design of USAID's Promote program focused on young, urban women counters these recommendations from the UN Women Coordination Division and could add to Afghan divisions. Granted, 68 percent of the Afghan population is under the age of 25, yet 77 percent live in rural areas. The 365-page request for proposals from USAID vaguely connects youth with education by explaining that the Promote program will "invest in opportunities that enable educated women (i.e, women between 18 and 30 years of age who have at least a secondary education) to enter and advance into decision-making positions in Afghanistan's public, private and civil society sectors."

The request stresses an expectation that selected participants will "work towards ensuring the welfare, rights and opportunities for all Afghan women." To its credit, the USAID request for proposals suggests a program risk is failure to garner support of male family and community members and it seeks to ensure that "skills and knowledge imparted to beneficiary organizations and their staff are sustained and replicated/ disseminated to others."

That is not enough. USAID coordinators should know that many applicants already self-select in not pursuing jobs and other opportunities. Coordinators could have emphasized diversity, eliminating age, gender and urban requirements – and ensured welfare, rights and opportunities for all Afghans. The criteria could have been left at attainment of a secondary education – thus targeting men and women of all ages who support fair policies and women’s rights.

Donors should be commended for targeting vulnerable groups that have been historically neglected, yet program exclusions should be crafted with great care based on sound research and good reasons. World Bank research in Afghanistan suggests that development programs mandating female participation can increase mobility and income for women, but may “not change female roles in family decision-making or attitudes toward the general role of women in society.” And a study cited in the USAID request for proposals notes that “the Afghan culture places a considerable emphasis on respecting elders because of their knowledge, wisdom, and experience, which explains why older transformational leaders are usually more successful in influencing the Afghan population.”

Expanding the pool of applications can add to an organization’s workload and costs, yet exclusion without good reason can neglect individuals of great talent, including the Afghan men who support women's rights and are also essential for the national stability. To ensure social cohesion, USAID should revise the conditions and open the program to more applicants.

Photo of entrepreneur at women's bazaar, arranged to allow women to sell handicrafts to NATO troops, courtesy of Maj. Meritt Phillips, US Army, and Wikimedia Commons. The woman's age is unknown, but if she's under 30 she's out of luck for the new USAID program.
No comments: