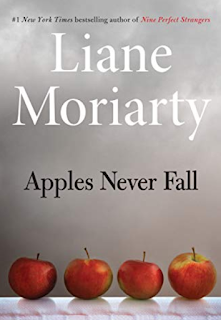 From all appearances, a newly retired couple with four grown children in Apples Never Fall, seem happy and comfortable until the wife goes missing for three weeks. Joy and Stan once ran a tennis school, dreaming of their own children finding success. The book, set in Australia, is about parenting and disappointments, with the youngest noting, “There’s this idea that all you need to do is believe in yourself, but the truth is, we all can’t be Martina.”
The exquisite plot could unfold in any wealthy Western setting or describe any passion. Yet every detail and off-the-cuff anecdote matter: the useless feelings associated with retirement, bitterness about a star student seeking out another coach, a child’s anger about a visiting student removing a banana from her backpack, sudden grief in a laundry room about a loved one years later, a key worn around a stranger’s neck, a souvenir magnet that slides down the refrigerator, a father’s reasons for escaping arguments, a husband’s stubborn refusal to rinse his plate, placing it in the dishwasher.
Retirement is stressful for the Delaneys. “No routine. Just the two of you stuck in your home, stuck in your aging bodies. An argument over a damp towel left on the bed could last for days and then it often turned out that the argument was … about something hurtful that was said thirty years ago….” Retirement eliminates the distractions that long soothed the sharp edges of hard feelings. Retirement requires adjustment, and as on character concedes, every lengthy marriage presents multiple motives for divorce or murder. Joy observes: “There were a lot of new rules for life, and she hadn’t caught up on all of them. Her children, who had come into the world completely uncivilized and learned all their good manners from her, sometimes cried, “Mum! You can’t say that!’”
Joy goes missing after a bitter and loud argument with her husband, who typically leaves home for hours or days after such incidents. His wife finds herself wishing she could do the same. “Sometimes she abrogated responsibility by fantasizing about kidnappers bursting into the house, bundling her into the back of their van, and taking her for a long rest in a nice, cool, quiet dungeon.” But Joy always prioritized her children, ready to listen and care for them, while also refurbishing the most unpleasant of family memories. “Why not rewrite the memory and remember it was a perfect day? What was the actual benefit of accuracy when it came to memories?”
Neighbors, friends, waitresses and others observe the family after Joy goes missing, even eavesdropping on conversations. The “neighbors were a nice, ordinary, happily married couple,” one friend tells the police. “This was absolutely true and absolutely not true. There was no such thing as a nice, ordinary, happily married couple.”
Chatty, rambling and impulsive, Joy worries at times about dementia. But she has empathy, too, and when a young stranger shows up on her doorstep, the couple takes her in. “Imagine, Joy thought. You’re all alone, without money, in a strange city, and you can’t go back home, what can you do except throw yourself on the mercy of strangers” She couldn’t imagine the same for herself. “She had always been cushioned by people.” The young woman, Savannah, surprises the couple by cooking, cleaning and caring for them. This inevitably concerns among the four children, prompting envy and reflection.
Liars tend to rely on excessive details, and Joy’s children notice Savannah’s mocking use of “tangential detail,” and this prompts concern and envy among her children, who had long since become bored and impatient with the Joy’s detailed stories. “Her children were the only ones allowed to tease her about this.”
Characters in this story often lie to one another or withhold details. “People made accusations of lying with such triumph: as if pointing out a lie won the game, as if you’d just shatter with the shame of it, as if they’d never lied themselves, as if people didn’t lie all the time, to themselves, to everyone.” Lies and impatience with details, the urge to protect loved ones and release old resentments, hinder the investigation, delaying discovery about why Joy Delaney disappeared.
No comments: