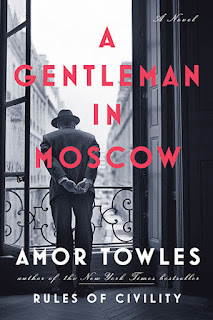 A Gentleman in Moscow by Amor Towles was a gift from a treasured friend, and finishing the novel was like saying farewell to another friend. At first, Count Alexander Ilyich Rostov may seem like a wealthy dandy, but time and time again proves himself to be a calming force – charming and deliberate, observant and generous, optimistic and kind, all the while under house arrest at the Hotel Metropol in Moscow from 1922 to 1954. Rostov, fond of Russia, left London to face charges by the new government. The offense? A short poem that Russian authorities have deemed as a dangerous “call to action.” If Rostov leaves the hotel, he will be shot on sight.

The punishment requires moving from his luxurious suite, surrounded by his possessions, to a tiny room in an upper floor of the hotel. Forced to downsize, Rostov mourns until he realizes that no possession can match the value of a strong friendship and he suddenly marvels at how people find it easier to say farewell to friends than possessions. “For eventually we come to hold our dearest possessions more closely than we hold our friends. We carry them from places to place, often at considerable expense and inconvenience; we dust and polish their surfaces and reprimand children for playing too roughly in their vicinity – all the while, allowing memories to invest them with greater and greater importance.” The count then concedes that “a thing is just a thing,” examining his belongings one last time before “expunge[ing] them from his heartache forever.”

The book is poignant for those shut in during the pandemic, those who abhor consumerism, and those near the end of life, when memories outnumber plans and dreams for the future. Rostov, well read and philosophical, is determined to live life as a man of purpose, and an optimistic one at that. He considers prisoners from literature who relied on hash marks to mark their days, noting how a year in prison could be mourned or celebrated. “For after all, if attentiveness should be measured in minutes and discipline measured in hours, then indomitability must be measured in years. Or if philosophical investigations are not to your taste, then let us simply agree that the wise man celebrates what he can." The trapped man may be imperfect, but he inspires because he never stops striving for improvement and is always open to friendship.

Reduced status and cutbacks for the Metropol, representing the decline in Moscow's cosmopolitan culture, do not trouble the count. Upon entering the Piazza at Christmastime, he is momentarily disappointed at finding the room ungarlanded, the balustrades unstrung with lights, a single musician replacing the orchestra, and most of the tables unfilled, but then his optimism kicks in: “But then, as every child knows, the drumbeat of the season must sound from within.”

The man is advisor, confidant and friend to all, finding reason to chat with everyone, staff and guests, including journalists, visiting dignitaries, and even Nina, a precocious pre-teen who purloined a passkey for the entire hotel, thus expanding their range for exploration and entertainment. Her brief visits over the years give him opportunity to watch her develop as a patriot.

The hotel is a welcoming cocoon in treacherous and volatile post-revolutionary Russia with shifting regulations, heightened mistrust and vague communications. Take “comrade,” increasingly popular as a Russian greeting: “A word of semantic efficiency, comrade could be used a as greeting or a word of parting. As a congratulations, or a caution. As a call to action, or a remonstrance.” Mishka, poet and dissident, is the long-time friend who actually wrote the poem that landed Rostov in detention. He visits Rostov occasionally, mourning the demise of Russian culture, traditions and honesty: “Our churches, known the world over for their idiosyncratic beauty, for their brightly colored spires and improbable cupolas, we raze one by one. We topple the statues of old heroes and strip their names form the streets, as if they had been figments of our imagination. Our poets we either silence, or wait patiently for them to silence themselves.”

Rostov, a long-time Metropol client who understands the meaning of impeccable service and traditions, eventually signs on as waiter at the Boyarsky, the hotel’s restaurant, teaming up with the chef and maître d’ in organizing events, tables and meals. He is skilled at sensing despondency and subterfuge, falsehoods and exaggeration, but resists giving up on others easily. “By their very nature, human beings are so capricious, so complex, so delightfully contradictory that they deserve not only our consideration, but our reconsideration - and our unwavering determination to withhold our opinion until we have engaged with them in every possible setting at every possible hour.”

A former Army colonel – Osip – seeks a better understanding of the West and turns to Rostov, with his reputation for being well traveled and cultured, for tutoring. The lessons are subversive, relying on materials like Alexis de Tocqueville’s Democracy in America and the film Casablanca. Osip, viewing the US and Russia in competition, is fascinated: “we an Americans will lead the rest of this century because we are the only nations who have learned to brush the past aside instead of bowing before it. But where they have done so in service of their beloved individualism, we are attempting to do so in service of the common good.”

The early 1930s are unkind to free-thinking Russians. Nina, a married woman with a young child, returns to the Metropol to request that Rostov watch her daughter while she visits the imprisoned father in Siberia. Rostov complies, not realizing the favor is not short-term. Hotel staff and friends come to his aid, and the seamstress assures Rostov that he is up to the challenge: “If you are ever in doubt, just remember that unlike adults, children want to be happy…. they still have the ability to take the greatest pleasure in the simplest things.”

Responsible for a child, he immediately discovers the joys of answering unending questions, and teaching by example, including stories from his own childhood and family home of Idlehour. One of those stories is about a clock that only rings twice a day, because Rostov’s father believed that no one should “attend too closely to the clock.” Thus, “if a man woke no later than six, engaged in a light repast, and then applied himself without interruption, by the hour of noon he should have accomplished a full day’s labor.” The noon bell signaled the end of work and time for “wise liberty”: “he should walk among the willows, read a timeless text, converse with a friend beneath the pergola, or reflect before the fire – engaging in those endeavors that have no appointed hour, and that dictate their own beginnings and ends.” And after a day lived well, there was no need to hear the second chime. One should be soundly asleep and to otherwise hear it “was most definitely a remonstrance” about laying awake and wasting valuable time.

Rostov recognizes life in the hotel limits aspirations for his young charge, Sofia. When she regrets that the memories of her parents fade with time, the count advises, “no matter how much time passes, those we have loved never slip away from us entirely.”  He wants her to explore her talents and the vast unknown, and the count resolves “it is hardly our purpose at this stage to log a new portfolio of lasting memories. Rather we should be dedicating ourselves to ensuring that they taste freely of experience.”

Long hours alone at the hotel allow Sofia to become a skilled concert pianist, providing the opportunity to travel to Paris for a concert, under the stern watch of party chaperones. Rostov prepares for them both to leave the Metropol, albeit with separate destinations, relying on a network of friends abroad and a stash of gold hidden away in the desk he kept over the years. When Sofia departs, he offers two pieces of parental advice: “The first was that if one did not master one’s circumstances, one was bound to be mastered by them; and the second was Montaigne’s maxim that the surest sign of wisdom is constant cheerfulness.” He admits that he will be both sad in her absence and joyful at every thought of her new adventures.

Shortly before he leaves, Mishka witnesses Rostov’s wide group of friends at the Metropol and their kindness. “Who would have imagined,” the friend observes, ‘when you were sentenced to life in the Metropol all those years ago, that you had just become the luckiest man in all of Russia.”

With the right frame of mind, the simple wanting of happiness, anyone can be as lucky as Count Rostov.