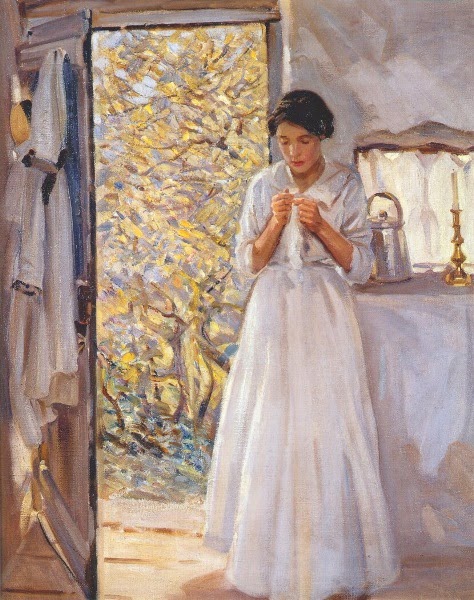 In two books, two characters want to leave their home without disturbing other family members. Opening the door to make a quiet escape is essential for each, and here are the descriptions of opening the door from each novel:

"In bed her only sensible thought was that he must have taken great care going along the hall without her hearing, and closed the front door inch by deceitful inch." Ian McEwan, The Children Act

"Saddiq had to open the door without disturbing his father. The man was sensitive to changes in teh house and would hear the door scrape against the dirt floor for feel a draft form outside.
"Crouching, Saddiq rubbed his hand back and forth, smoothing dirt near the doorway ...Then he turned full attention to the door. Using two hands, he slowly lifted the thick wooden bar and gave the slightest tug. Gripping the side of the door with both hands, Saddiq pulled steadily just enough to slip outside. The lower edge rubbed against the floor with the softest whoosh. Holding his breath, he stepped outside, gently closing the door....
"His father did not storm outside with questions." - Allure of Deceit

McEwan's sentence is more concise.  One reason may be that he is the better writer! But another difference stems from each character's' age. The first sentence describes an unhappy husband and the second describes a child who wants to embark upon a quest without his parents' knowledge.

And another difference is point of view. The first sentence is described by the wife who has just realized her husband's secret departure. The stealth in the second sentence carries the point of view of the child who opens the door.

Both examples turn an ordinary routine, the opening of door, into anxious intrigue.

Request a review copy of Allure of Deceit.

Portrait of The Open Door by Helen McNicoll, a Canadian painter who died in 1915 at the age of 35, courtesy of Wikimedia Commons, in the public domain of the EU, the US and countries with a copyright term of life of author plus 70 years or less. "Primarily a painter of working women and maternal themes in outdoor settings, McNicoll drew her subject-matter from the tradition of Impressionist women painters such as Berthe Morisot and Mary Cassatt, while acknowledging the “new woman” of the modernist age," notes Natalie Luckyj in the Dictionary of Canadian Biography.
No comments: