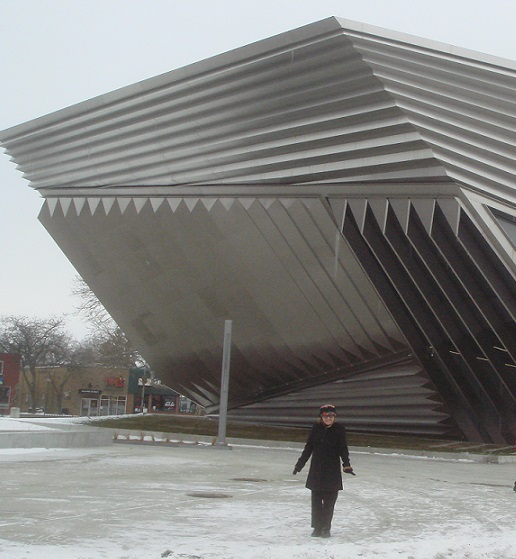 Some students in Michigan compare it to a spaceship. And that's appropriate, because the spirit soars for visitors to the Eli and Edythe Broad Art Museum, inside and out. "We are capable" is the instinctual response. The museum is committed to "exploring international contemporary culture and ideas through art."

The museum's home is located suitably on the Michigan State University campus in East Lansing and the architect is Zaha Hadid.  "A Baghdad-born, London-based architect might not be the most obvious candidate for a commission in the heart of Middle America," said Robin Pogrebin for the New York Times when the commission was announced five years ago.

"No name is more celebrated in architecture these days than the London-based Zaha Hadid" wrote Julie V. Iovine for the Wall Street Journal , under a headline "Sculptural Yet Sensible." She adds Hadid's "latest notable effort" is in the Midwest.

Hadid studied mathematics in Lebanon - which undoubtedly enhanced her ability to work and innovate with engineers - and architecture in London before founding her firm Zaha Hadid Architects, going on to become the first woman to win the Pritzker Prize for Architecture.

Lines soaring upward, connecting like crossroads, are an appropriate design theme for a museum focusing on international contemporary art. The building stands as testament that globalization can enrich as much overwhelm contemporary art and also suggests as argued by Jonathan Harris that "Public museums and galleries around the world are themselves increasingly preoccupied with the size and character of their publics, as art becomes a subsidized vehicle for national government and regional powers' 'cultural policy' directed towards a variety of economic ends including 'regeneration,' 'reconciliation,' and 'social inclusion.'" The comment is in Harris' introduction to Globalization and Contemporary Art.