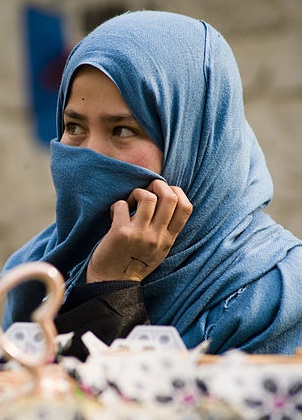 The Afghan women will be all right.

A post from Patheos by eren both assures and chides US, Canadian and other pundits fretting about the future of Afghan women even as Western troops withdraw. The post bashes the colonial notion of noble savage, the notion that Afghan's women voters will vigorously pursue democracy.

"I think it is quite important to recognize that reconstruction is a process where gender relations will be shifted, changed and re-arranged," eren notes. "Yes, there is a lot to do. Afghanistan remains the most dangerous country for women today and education for both men and women may be the only way to end prevailing domestic violence."

In all the shifting, individuals must define happiness on their own ... eren goes on to suggest that the time has come "to hand the country back to its people, with no expectations of 'perfect Afghani women' and no further money for weapons."

Globalization is tricky and exposes the dangers of stereotyping. The ideal society varies among women, among communities, so much so that the shaping and reshaping is constant and yet one ideal can never be achieved.

"The past decade has opened the minds of Afghan women about the importance of democracy, liberty, education, and being active participants in the processes of national politics and decision making," writes Massouda Jalal, former Minister of Women in Afghanistan, for the On Faith section of the Washington Post.

But as the US prepares to leave Afghanistan, she warns that Taliban-style violence against women is on the rise. "If the United States and our international allies would leave us, they should first ensure that women’s voice in national decision making is strong enough to make a difference," she contends.

The US and Afghanistan cannot afford to abandon investments in a foundation of human rights - and allow a decade of investment go to waste.

The US announced its plans to withdraw well in advance, and that may draw more attention from US citizens and international journalists to Afghanistan and its politics. The globe will condemn every atrocity.
No comments: