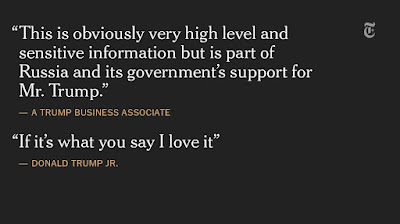 Donald Trump Jr's release today of an email exchange is stunning on many levels. The exchange suggests he understood that Russia wanted to support Donald Trump's presidential campaign with damaging information about his opponent Hillary Clinton. Younger Trump, along with Jared Kushner and Paul Manafort, then campaign manager, met with a Russian attorney proffering the information in June 2016. After the meeting was proposed in an email, Donald Jr's response was quick: "If it’s what you say, I love it, especially later in the summer.” The response suggested he had little doubt about the type of support and few concerns about the source of such opposition research.

The lawyer, wanting to help the campaign, insinuated that Russians had been funding and supporting the Democratic National Committee, but had no proof. Trump Jr noted that the lawyer was "vague" and "made no sense" with "no meaningful information." He did not alert authorities like the Federal Bureau of Investigation. Instead, he and perhaps the other two took it upon themselves to determine the information was meaningless.

By all accounts, this is a clown show, and we may not ever really know all what was said during the meeting. The US president's response,  according to a statement read by the deputy White House press secretary: "My son is a high-quality person and I applaud his transparency."

The statement resonates with sarcasm considering that Donald Jr has revised descriptions about the meeting several times and is among Trump campaign officials, some who still work for the US government, forced to revise lists of meetings with foreign nationals.

Collusion, election fraud, lying to American voters should not be a surprise with this young presidency, not after the wearying campaign. What is surprising is that Donald Jr released these emails himself, as if he saw nothing wrong. As US Senator Mazie Hirono put it on Twitter, "When @realDonaldTrump said show us the evidence of collusion, I have to say, I didn't expect his son to answer."

One who may be a party to the patterns of a possible crime - a growing list of events being investigated by Robert Mueller and congressional committees - should not be praised for transparency after rushing to beat reporting by the New York Times.

This is neither a track record of competence nor "high quality" - a disturbing and tasteless phrase, one that signals division, otherness, marginalization, insecurity and reflects troubling policy proposals that target large groups of people like Muslims and immigrants. Another son, Eric, echoed such a sentiment about Democrats during an interview: "I've never seen hatred like this. To me, they're not even people. It's so, so sad. I mean, morality is just gone. Morals have flown out the window. We deserve so much better than this as a country."

The campaign capitalized on deeming common courtesy as "political correctness" and some spokespeople even fed the resentment and encouraged scapegoating. Supporters - from emotion or a lack of education - did not question shallow reasoning or quick fixes. The media honed in on supporters' crude signs, bullying and fist fights at campaign rallies. Hillary Clinton called out the alarming behavior, using a phrase that eventually came to haunt her:

"We are living in a volatile political environment. You know, to just be grossly generalistic, you could put half of Trump's supporters into what I call the basket of deplorables. Right? The racist, sexist, homophobic, xenophobic, Islamaphobic - you name it. And unfortunately there are people like that. And he has lifted them up. He has given voice to their websites that used to only have 11,000 people - now 11 million. He tweets and retweets their offensive hateful mean-spirited rhetoric. Now, some of those folks - they are irredeemable, but thankfully they are not America." Her remarks included another age-old signal - "Right?" - so often alerting skeptical and doleful listeners to the possibility of discriminatory words and feelings that will only cause woe to the one who dares utter them, even if only once, even though followed by swift apology.

Back to "high quality" people, a phrase that suggests that some people for are innately better than other people and deserve more - money, leeway, chances, support, opportunity to complain, cut corners, make mistakes, cheat and lie. There are better descriptors. Consider an article by Forbes - "5 qualities of charismatic people: How many do you have?" The qualities: self-confidence, including optimism; the skill to tell stories; body language that is open and approachable; relying on conversation about others and being a good listener.Those who assign labels like "high quality" may think that only they can decide rules, who must follow and need not, when perpetrators should be exposed and punished or forgiven. Those who use the phrase are insecure, desperate to be regarded as better of others, deserving of a higher standard of justice even while they make mistake after mistake after mistake.

And this is a pillar in intervening and disrupting medical decisions for British infant Charlie Gard, diagnosed as terminally ill by his doctors - assuming this represents kind, magnanimity and justice - blind to any contradictions with policies blocking thousands of refugee families from Syria many with their own infants.

Russia intervened in the US presidential election, and the United States was conned, a reflection of many voters' failure to follow the news and apply critical thinking and logic to wild populist claims designed to infuriate without delivering viable solutions..

As Nicholas Kristof notes for the New York Times, it is a sad day for the country. It's also a sad day for democracy and the globe. 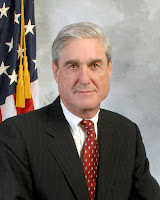