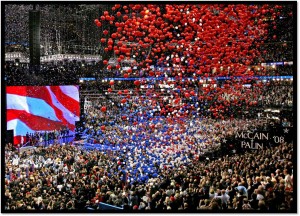 Citizens around the globe closely follow US election campaigns, because US policies and leaders carry such much influence. This year and next, such influence is heavy for Afghanistan. Thoughts on prosperity, religion, agriculture, the internet, education and security from the Republican Platform 2012:

Prosperity provides the means by which individuals and families can maintain their independence from government, raise their children by their own values, practice their faith, and build communities of self-reliant neighbors.

Republicans understand that you can succeed in a negotiation only if you are willing to walk away from it.

The first provision of the First Amendment concerns freedom of religion. That guarantee reflected Thomas Jefferson’s Virginia Statute for Religious Freedom, which declared that no one should “suffer on account of his religious opinion or belief, but that all men shall be free to profess, and by argument to maintain, their opinion in matters of religion….” That assurance has never been more needed than it is today, as liberal elites try to drive religious beliefs - and religious believers - out of the public square.

We assert every citizen’s right to apply religious values to public policy and the right of faith-based organizations to participate fully in public programs without renouncing their beliefs, removing religious symbols,or submitting to government-imposed hiring practices.

Agricultural production and agricultural exports are a fundamental part of the U.S. economy, and the vigor of U.S. agriculture is central to our agenda for jobs, growth, and prosperity. Our farmers and ranchers are responsible for millions of jobs and for generating a trade surplus of more than $137 billion annually. Our producers provide America with abundant food, export food to hungry people around the world, and create a positive trade balance.

We support the historic role of the USDA in agricultural research that has transformed farming here and around the world. Because food safety is a major concern of the American people, we urge Congress to ensure adequate resources for the Department’s responsibilities in that regard.

The productivity of America’s farmers makes possible the generosity of US food aid efforts around the world. These programs are fragmented between the Department of Agriculture and the US Agency for International Development. They should be streamlined into one agency with a concentration on reducing overhead to maximize delivery of the actual goods.

The environment is getting cleaner and healthier. The nation’s air and waterways, as a whole, are much healthier than they were just a few decades ago. Efforts to reduce pollution, encourage recycling, educate the public, and avoid ecological degradation have been a success.

The Internet has unleashed innovation, enabled growth, and inspired freedom more rapidly and extensively than any other technological advance inhuman history. Its independence is its power.

Consumer choice is the most powerful factor in healthcare reform. Today’s highly mobile work force requires portability of insurance coverage that can go with them from job to job. The need to maintain coverage should not dictate where families have to live and work. Putting the patient at the center of policy decisions will increase choice and reduce costs while ensuring that services provide what Americans actually want.... No healthcare professional or organization should ever be required to perform, provide for, withhold, or refer for a medical service against their conscience.

Education is much more than schooling. It is the whole range of activities by which families and communities transmit to a younger generation, not just knowledge and skills, but ethical and behavioral norms and traditions. It is the handing over of a personal and cultural identity.

Because parents are a child’s first teachers, we support family literacy programs, which improve the reading, language, and life skills of both parents and children from low-income families.

We support keeping federal funds from being used in mandatory or universal mental health, psychiatric, or socio-emotional screening programs.

The current Administration’s most recent National Security Strategy reflects the extreme elements in its liberal domestic coalition....The strategy significantly increases the risk of future conflict by declaring to our adversaries that we will no longer maintain the forces necessary to fight and win more than one conflict at a time. It relies on the good intentions and capabilities of international organizations to justify constraining American military readiness. Finally, the strategy subordinates our national security interests to environmental, energy, and international health issues, and elevates “climate change” to the level of a “severe threat” equivalent to foreign aggression. The word “climate,” in fact, appears in the current President’s strategy more often than Al Qaeda, nuclear proliferation, radical Islam, or weapons of mass destruction. The phrase “global war on terror” does not appear at all, and has been purposely avoided and changed by his Administration to “overseas contingency operations.”

Combat readiness also requires that we reserve troops for truly necessary operations by not overextending them around the world. We recognize that drastic cuts to our military’s end strength pose severe national security challenges.

We will use the full force of the law against those who engage in modern-day forms of slavery, including the commercial sexual exploitation of children and the forced labor of men, women, and children.... we call for increased diplomatic efforts with foreign governments to root out complicit public officials who facilitate or perpetrate this evil.

We will resist foreign influence in our hemisphere.

The imminent withdrawal from Afghanistan of the 30,000 “surge” troops sent there two years ago comes weeks before this year’s presidential election and against the advice of the current President’s top military commanders. Future decisions by a Republican President will never subordinate military necessity to domestic politics or an artificial timetable. Afghans, Pakistanis, and Americans have a common interest in ridding the region of the Taliban and other insurgent groups, but we cannot expect others to remain resolute unless we show the same determination ourselves. We will expect the Afghan government to crackdown on corruption, respect free elections, and assist our fight against the narcotic trade that fuels the insurgency. We must likewise expect the Pakistan government to sever any connection between its security and intelligence forces and the insurgents. No Pakistani citizen should be punished for helping the United States against the terrorists.

We recognize the historic nature of the events of the past two years – the Arab Spring – that have unleashed democratic movements leading to the overthrow of dictators who have been menaces to global security for decades. In a season of upheaval, it is necessary to be prepared for anything.
No comments: