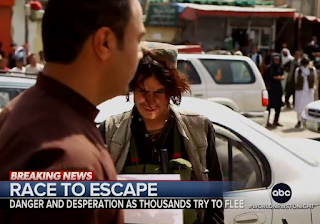 A handful of western journalists have stayed in Afghanistan to report on the Taliban takeover and the chaotic evacuation of foreigners and Afghanis who supported US efforts over the past 20 years.

Taliban leaders are desperately trying to send signals to the foreign media that they can improve governance and bring order to Afghanistan. But good governance requires good communications which rely on strong reading and critical thinking skills.

Leaders lacking such skills will only deliver frustration, as suggested by Ian Pannell reporting for ABC News.

"These guys can't read," said Pannell, clearly frustrated. "The agony of not being able to get to the airport, past Taliban-controlled checkpoints, is the reality on the ground here." 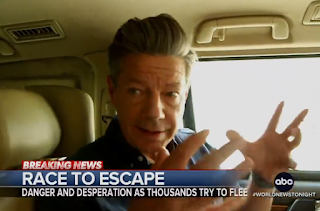 The Taliban face a big challenge with the demographics of the country's 38 million people. The median age of the population is 18.6. So more than half the people were not around in 2001 when the Taliban last ruled the country and have no recollection of the harsh edicts based on arbitrary interpretations of Islamic writings. Women also make up half the population, and many bitterly oppose Taliban policies forcing subservience to male relatives, arranged marriages at early ages, and bans on a female presence at schools and work,

One might wonder why the Taliban would desperately try to prevent Afghans who despise such policies - some of whom might organize formidable resistance - from fleeing the country.

Such high rates of illiteracy offers an explanation for the "wholesale collapse" of the Afghan military in defending the country against the Taliban. "[P]erhaps the biggest hardship was having to teach virtually every recruit how to read," suggested Craig Whitlock in the Washington Post, and "only 2 to 5 percent of Afghan recruits could read at a third-grade level despite efforts by the United States to enroll millions of Afghan children in school over the previous decade.... Some Afghans also had to learn their colors, or had to be taught how to count."

The Taliban may have overtaken the country - along with a sizable cache of planes and artillery from the US and other foreign governments - but many of their fighters lack the skills to use the high-tech equipment. Hence, the Taliban have blocked borders and demand that neighboring countries return  fleeing Afghan soldiers who worked side by side with US and NATO troops. More than 500 Afghan soldiers fled to neighboring countries including Uzbekistan and Tajikistan, using US-supplied planes and helicopters, reports the Hill. Uzbekistan has since returned some of the refugees, after the Taliban offered security guarantees, reports Reuters. Uzbekistan, Tajikistan and Turkmenistan express concerns about admitting refugees, some of whom could be fighters in disguise or extremists, reports Al Jazeera.

The Taliban also desperately need many Afghanistan's government workers for now, hoping to harness top minds and talent to sort through an array of policies and finances, everything from tracking down revenues and foreign aid to arranging new partnerships and favorable contracts for infrastructure and the sale of resources like rare-earth materials.

So, the Taliban tolerates the foreign press for now, striking a "conciliatory tone," hoping to prevent mass panic and protests by emphasizing a smooth transition. The leaders continue to claim they will take no retribution against the many who supported the US presence over the past two decades.

A handful of courageous people, reporters like Pannell and Afghan citizens on social media, document the tense transition, and Taliban leaders will struggle to appease a populace that has become accustomed to more freedom and opportunities over the past 20 years than the the new regime may be prepared to provide.

Screenshots of Taliban handling a letter authorizing entry to the airport near Kabul and Ian Pannell, courtesy of ABC News.