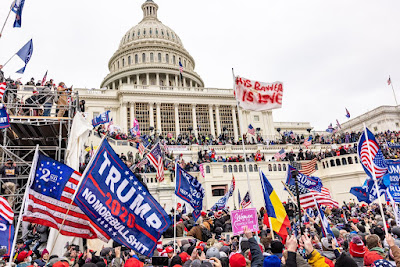 Democrats and Republicans battle for the soul of the nation, a sentiment expressed by Joe Biden in a 2017 essay for The Atlantic. Astoundingly, the party that long claimed to uphold law, order, and family values embraced Donald Trump as its leader. Peril by Bob Woodward and Robert Costa details the final months of the Trump administration and early months for his successor, Joe Biden .

Trump’s goal as president was to disrupt government, and Biden's style is to restore expertise, competence and faith in government. With a style that is choppy even for journalists, the book details how the two men handle policy and crisis. Trump bullied and humiliated his staff, and the administration had a revolving door with four chiefs of staff, six national security advisors, and six defense secretaries in four years. Trump rejected allies and fellow NATO members while cozying up to troubling leaders of Hungary, Russia and North Korea.

Trump’s flightiness, cowardice about direct confrontations, and crazed anger over losses and stalemates may have been most apparent in his approach to Afghanistan. On November 11, four days after Biden was declared winner of the 2020 election, the chairman of the Joint Chiefs of Staff was surprised by a one-page memo on “Withdrawal from Somalia and Afghanistan.”

The memo, signed by Trump, had an unusual format. Quickly determining that the Defense Department staff, the national security advisor, and White House counsel were also unaware, General Mark Milley explained that Trump “signed something … without all the due diligence and military advice that I’m supposed to give him by law.”

The national security advisor soon alerted Milley that the memo was “a mistake” and should be nullified. Still, staff continued to worry that the volatile man could order all manner of military actions, even in his final hours, and many had little choice but to tiptoe around him, trying not to spark dangerous conflict.

Trump’s sole interest by January was convincing others that he had won the 2020 election. He renewed contact with Steve Bannon, a former advisor, who offered an ugly plan: “If Republicans could cast enough of a shadow on Biden’s victory…, it would be hard for Biden to govern. Millions of Americans would consider him illegitimate.”

Trump and some supporters pressed Vice President Mike Pence to reject certified electors from battleground states including Michigan and Arizona. Pence declined, after legal experts rejected such maneuvers. On January 5, the night before the joint session of Congress for certifying the election results, Trump ordered his campaign staff to release a statement that he and Pence were in “total agreement that the Vice President has the power to act.” Trump did not consult with Pence or his staff.

On the morning of January 6, Pence advised Trump that he was headed to the Capitol to do his job, and Trump whined, cajoled and pushed. Accustomed to getting his way, Trump had two expectations – for Pence to reject valid ballots and Congress to cave.

After Pence and Congress declared Biden the winner, many in Congress continue to remain wary. Senator Bernie Sanders of Vermont, recalling Nazi Germany, warned that Democrats could not take anything for granted after January 6. “Germany was one of the most cultured countries in Europe. One of the most advanced countries. So how could a country of Beethoven, of so man great poets and writers, and Einstein, progress to barbarianism?” Democrats must tackle the question, Sanders said, and the task is not easy.

Less than one quarter of the book is devoted to Biden’s presidency although the Trump section is sprinkled with reactions from Biden as candidate. Biden is simply less shocking.

One anecdote stood out, though, suggesting that Biden's staff overprotect and overdo for the president. Peril describes staff interrupting and joining a sensitive call between Maine’s Senator Susan Collins and the president – “Technology taking over, everyone on the line, running all their lives…. Another shadow over the shoulder of Joe.”

The book also describes Biden as holding firm to his principles, with a decision-making style that contrasts sharply with Trump’s.

Like Trump, Biden rejected a “forever war” in Afghanistan and a mission that “had shifted from its original intent.” Struggling with the “damned-if-you do, damned-if-you don’t” decision, Biden ordered a thorough review and announced the end of U.S involvement in the war less than three months into his presidency, fully understanding that the Afghan military, trained and supplied by the US military, might fail in defeating the Taliban.

By August 15, the Taliban stormed Kabul.

Throughout Peril, numerous leaders and political observers fret about Trump’s behavior, so much so that they become problems themselves. South Carolina Senator Lindsay Graham, who befriended the former president, explains: “Smart, rational people break when it comes to Trump. He’s not trying to get them to break. There is no magic. He’s just being him. And he wears you down. He’ll get you to do things that are not good for you because you don’t like him.”

It's one of the many reasons why voters should ignore Trump. Peril describes Graham’s repeated efforts to convince Trump to accept his loss in the 2020 election and move on. In one such exchange, Trump worried about losing his base. “They expect me to fight, to be disruptive.”

Trump’s supporters demand disruption even while claiming the United States is exceptional, the best country in the world. And there is the contradiction, embracing the country as superior, exceptional, untouchable even while doggedly pursuing disruption of its finest institutions, especially when their leaders refuse to capitulate to one highly flawed man.