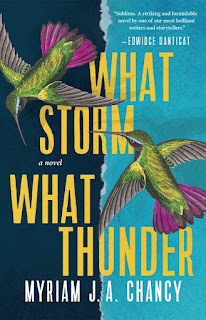 A 7.0 magnitude earthquake strikes Port-au-Prince in January 2010, a place already so desperately poor, prompting survivors to scramble to rescue loved ones and strangers and “to save photographs and whatever trinkets they held dear that meant nothing at all to anyone else on earth.” In the city’s poorest neighborhoods, and later in the refugee camps, people become the same, “were always the same,” and as one market vendor observes, this was “something we had always known from our low-to-the-ground perches…”

In What Storm, What Thunder by Myriam J.A. Chancy, ten narrators, connected by blood and, in some cases, friendship share the story of the earthquake and its aftermath. the stories are poignant and brutally honest. Often, small and seemingly inconsequential objects and memories link the characters and the relationships they cherish. Even before the earthquake, all held “dreams about where they’d rather be.” Individual methods may have varied, including wealth, marriage, or crime, but the common hope is to escape hardship and grinding poverty.

Haiti ranks among the poorest countries in the world with a GDP per capita of less than $3000. Such poverty blurs individuality, and vendor Ma Lou, mother and grandmother of two narrators, describes the marketplace as a place of “colliding senses, … much of it decay, especially at the end of the day, when the best of what’s available is gone and all that remain are castoffs, the leftovers.” She describes the market workers as blending into the dust, becoming “one with the elements…, the nothing that we are.” She adds, “striving toward perfection is beyond our reach.”

Haitians who managed to flee prior to the earthquake learn the news by way of international broadcasts. Haunted and torn, they do not feel as they belong in their new homes: “Sometime, being an immigrant is like being illiterate,” explains one of the narrators. He feels the weight of the tragedy, knowing that up to 300,000 died and survivors endure unthinkable hardship – hunger, sexual assault, cholera, injuries while no medical treatment. Yet he also understands there is little he can do to help by returning home. “The weight of not being able to do enough,” Didier notes. “If I was honest with myself, that was why I’d left.”

The book lightly criticizes charity and donors who set agendas for tackling crises, drawn into assisting others while seeking credit. Organizations and donors judge needs while victims can only wait and accept whatever is given. Of course, after the earthquake, Haitians required safe shelter, clean water and nutrition, yet what should be so easy, supplying basics, becomes overwhelming. And of course, individuals have needs and priorities less obvious to others – a photograph of a loved one, bones of a deceased husband, the fading memories of a child’s pattering footsteps, giggles and final kiss.

One of the most vulnerable narrators, a woman who loses three children refers to NGOs as Not God’s Own. The tent where she lives after the quake includes a label, “A gift from the American people … in association with the Republic of Ireland” and she finds herself regretting dreams and plans made with a husband who abandoned her after the tragedy. “She wished they had other things in mind, escape routes and exit strategies. They’d set their eyes on nothing but a future in which everything would go according to a fabricated plan that they believed in more than in reality itself – or that amplified it.”

Globalization of news, the instant knowledge about a distant crisis, might catch attentions briefly and that invites comparisons. Not long after the tragedy, one of the narrators, an architect, receives an email about an earthquake in the Italy and the loss of 200,000 rounds of pecorino. Activists quickly organize a global campaign to cook Italian recipes and donate proceeds to the region. “It was a kind objective, a goodwill gesture, but reading about it only made me sigh wearily,” notes Anne. “For every round of cheese, a person had died in the Haiti earthquake, and now I was expected to respond to this regional calamity while still burying our dead as if I, and others, might be ‘over’ what had happened to us….”

Still, the architect flounders in helping her hometown and leaves for Africa, later putting her energy to entering an international competition for rebuilding a Haitian cathedral near her neighborhood. She cares deeply about the project, describing the luxury of researching the history, exploring and imagining new beauty, while deciding whether her goal in creating a replacement is to commemorate the dead or recognize what remains. Her section concludes: “I did it for the satisfaction of doing something, of imagining a better, less hostile future, where a God might still exist to watch over us.”

As pointed out in Allure of Deceit, no amount of rules and regulations can prevent the ambition, greed, judgment, control, or inequality that can accompany organized charitable giving.

The publication of What Storm, What Thunder, a work of fiction, was timely as another earthquake, magnitude 7.2, struck Haiti in August 2021, about 70 miles away from the capital, destroying more than 60,000 homes and killing more than 2,000 and injuring 12,000.