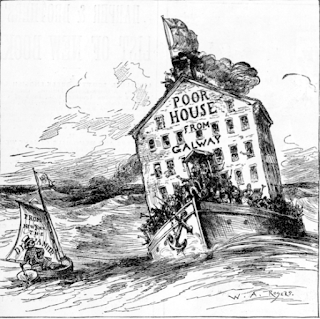 Americans, always ready for a celebration, will don the color green and join parades and parties on March 17, to commemorate Saint Patrick, the patron saint of Ireland. Many who celebrate won't realize just how much the Irish were despised a century ago, suggests "The Wearing of the Green," an exhibition at the Eli and Edyth Broad Museum of Michigan State University.

"Such eagerness to celebrate Irish cultural identity has not always existed in this country," notes the introduction. "During the pre- and post-Civil War years, Irish immigration reached unprecedented levels, and with this emerged the stereotyped image of the heavily accented, irresponsible, inebriated, quick-tempered 'redhead,' typically named Paddy or Bridget. Supported by 19th-century social-scientific theories of evolution, and embodying conventional Victorian-American ethnocentric views, cartoons and caricatures further portrayed the Irish as childlike, apelike, or even subhuman."

The earliest Irish immigrants were mostly Protestant who were followed by less wealthy Catholics. Ireland's population swelled in the 19th century, and by 1830, and limited land combined with unsustainable farming and tenant arrangements could not support the population. "It was the cataclysmic Potato Famine of 1845-1851, one of the most severe disasters in Irish history, that initiated the greatest departure of Irish immigrants to the United States," explains Brendan A. Rapple for Countries and their Cultures and Everyculture.com. "As many as 1.5 million individuals perished of starvation and the diverse epidemics that accompanied the famine. A great number of the survivors emigrated, many of them to the United States. From the beginning of the famine in the mid-1840s until 1860 about 1.7 million Irish immigrated to the United States..."

Rapple goes on to describe the stereotypes and cartoons of Irish as "pugnacious, drunken, semi-savages" - with widespread disdain for Catholicism, large families and a willingness to accept low wages in the face of prejudice. 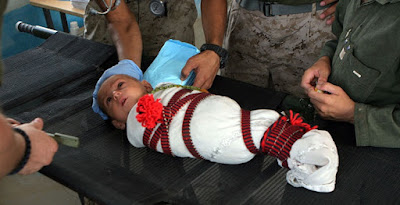 Cartoons disparaging the immigrants were common in the 1800s and early 1900s. "Produced for wide public dissemination, these images can therefore be understood as social barometers, providing glimpses into the American cultural scene of their day and the often negative stereotyping of various ethnic groups," notes the introduction to "The Wearing of the Green."

Discrimination was blatant during the 19th century with "many ads for employment were accompanied by the order "NO IRISH NEED APPLY," explains Victoriana Magazine. "Nativists reacted to increased Irish immigration with violent riots and increased demands for limits on immigrants' rights.  These nativist groups considered the immigrants as a threat and regarded the Catholicism of the Irish as an alien and rebellious religion and culture."

Of course, the history of a harsh welcome for the Irish immigrants invites comparisons to receptions for modern immigrants and refugees, especially those fleeing the civil war in Syria. "In the Past Lane" recalls a time when Americans regarded some Irish immigrants as terrorists. The Given Day, a memorable novel by Dennis Lehane captures the mood about immigrant communities and anarchy in the early 20th century.

Today, more than 32 million, or 10 percent, of Americans claim Irish ancestry, according to the US Census Bureau, and despite the surname, yes, I am one. More than 35 percent have completed higher education. "The world's first St. Patrick's Day parade occurred on March 17, 1762, in New York City, featuring Irish soldiers serving in the English army," notes Sean Dunne for Irish Central.

The United States has more than 3.6 million people with Arab ancestry, which encompasses immigrants from Syria, Lebanon, Egypt, Palestine, Moroccan, Iraq, Jordan or Yemen and represents a little more than 1 percent of the population, reports the Arab American Institute. Like the Irish Americans, Arab Americans have a median income that is slightly higher than the nation as a whole, and 45 percent have completed higher education.

Many Americans have learned from history and protest any form of discrimination. But not all.

"We live in an era that has unleashed all manner of odious, racist rhetoric," writes Francine Prose for the Guardian. "The bar for what retains the power to shock us is being raised daily. But some comments still cut deep. 'Culture and demographics are our destiny. We can’t restore our civilization with somebody else’s babies,' said Iowa Representative Steve King over the weekend."

King has since insisted that his comment was about "western civilization" and not race. He worries about a changing culture from the increasing numbers of Hispanics, Asians and other immigrants, too. A century ago, the Irish were "somebody else's babies." But the greatness of western civilization is epitomized by the regard for all humanity, regardless of where those people might live on this planet of ours. Especially here in the United States, we and our ancestors are someone else's babies.

Cartoon of "poor house" of Irish immigrants, courtesy of Victoriana magazine. US Marines treat an Afghan infant in Delaram, courtesy of the US Marine Corps and Wikimedia Commons.
No comments: