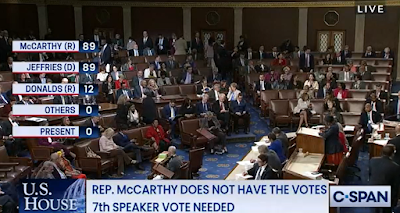 With a tight margin, the frontrunner in the Republican contest for speaker of the House of Representatives can afford to lose only a handful of votes.

So far, Rep. Kevin McCarthy has failed to convince 20 Republican hard-liners. Democratic Minority Leader Hakeem Jeffries emerged as the top vote-getter in each round. McCarthy must win a majority of voting members; absent members or those who vote present do not count. Jeffries would have to count on 11 Republicans going missing or voting present to win the majority. With multiple Republican holdouts, McCarthy would need at least 11 Democrats to not show up or vote present.

As the struggle continues, observers wonder if the decision could take weeks, wearing members down, and whether the oldest representatives can maintain stamina for rounds of voting in a crowded chamber during the post-holiday winter months. The United States is reporting 400,000-plus new Covid-19 cases weekly.

Democrats, after years of cultivation and targeted messaging on climate change, reproductive rights and student debt, attracted more votes from young adults during the 2022 midterms. Turnout was 27 percent by voters aged 18 to 29, and exit polls suggest that more than 60 percent of young adults preferred Democratic candidates, according to Tufts University Center for Information and Research on Civic Learning and Engagement.

Even so, Congress has been steadily aging since the 1980s, reports NBC.

And oldest members of the House are dominated by Democrats. The House has 11 members aged 80 years and older: nine are Democrats and two are Republicans.  Grace Napolitano, a Democrat from California, age 87, is the House’s oldest member, replacing Alaska’s Don Young after his death in 1922 and then Eddie Bernice Johnson of Texas, who retired this year. Young was 88 and Johnson is 87.

Age is not the sole contributing factor for deaths that could disrupt the balance of power. A Yale research study in late 2022 identified partisan differences in excess deaths during the Covid-19 pandemic – more than 70 percent higher among Republicans than Democrats in two states, Ohio and Florida.  That gap in death rates increased after vaccines became available and vaccine hesitancy emerged among Republicans.

Of the more than 70 newcomers to the House, five are 60 years or older – three Republicans and two Democrats.