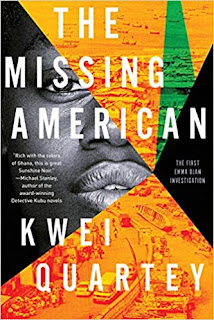 Ghana ranks 73rd out of 180 nations on Transparency International’s Corruption Index – with 33 percent of people surveyed suggesting that corruption had increased during the previous year. A similar number report paying a bribe for public service.

And yet, Ghana is one of Africa's least corrupt countries.

The Missing American by Kwei Quartey is about an elderly American widower who meets a Ghana woman on a Facebook group. Gordon Tilton falls in love and then wires several thousand after the woman claims her sister requires surgery. It’s hard to believe that any rational adult might fall for such a request. Most victims are intent on moving on and keeping the crime a secret. But Tilton confides in a journalist friend who suspects official involvement and urges him to fight: “this is what scammers rely on – your shame and embarrassment. They’re master manipulators. You’re not the culprit here, you’re the victim and it’s time to turn it around and become a survivor,”

Tilton heads off to Ghana alone to report the incident to Accra police and track the culprits known as sakawa boys. Unsatisfied with the investigation, Tilton proceeds on his own and goes missing.

Emma Djan, 26, is a new detective. She lost her job as a police officer after an attempted rape by a commanding officer. A colleague advises her to apply to the detective agency, and she obtains a job at an Apple store to get by in the meantime. Weeks later, the agency’s owner calls, and during their first meeting the new employer demands honesty, punctuality, patience and curiosity: “second to lying, what I hate most is lateness.”

Yet like it or not, lying is an essential skill for investigators, especially those immersed in a corrupt society. From the start, when Yemo Sowah  asks if Emma has job elsewhere, she lies and says no, eager to start the following day, working for Tilton's son to search for the missing father.

And later, the lies come easier. After tracking down Tilton, her boss tells her that the agency’s role in that investigation is complete. Yet Emma continues to pursue witnesses and ask questions. She cozies up to one of the sakawa boys, lavishing him with praise, coaxing him to talk about his connections.

Rogue curiosity and corrupt officials catching on to her lies nearly get Emma killed.

The fast-paced book with multiple subplots also offers a brief, intriguing look at charitable endeavors. A wealthy Ghanaian woman organizes a documentary promoting an autism center and featuring one child’s artistic talent. She plans a shoot: “She would enter the scene, sit next o the boy, and explain how she often welcomed him and other children from the Center to her home (which wasn’t entirely true). The idea was to put an ‘international face’ to the appeal and boost the Center’s new website and crowdfunding campaign. [The] theory was that well-off people are more likely to donate if they could ‘see themselves’ in the video - if they could ‘relate’ to a well-heeled, fashionable woman contributing to such a noble cause.”

Her reasoning? She frets about donor fatigue, and people in the West were weary of images of flies buzzing about the heads of starving children.

Charitable needs are great in countries throughout Africa. But internet scams and massive corruption erode trust and generosity, and donors find it easier to just say no.

By one estimate, Ghana loses about US$ billion each year to corruption. The costs are high, as revealed in The Missing American.