Pointing out the obvious 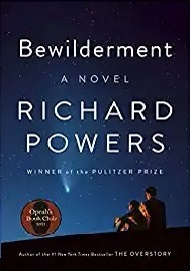 Society often ostracizes its most extraordinary children. Bewilderment by Richard Powers is set in the near future in a bleak world of irreversible climate change with constant reminders of the habitat loss and environmental stress. The US is caught up in a downward autocratic cycle, as citizens resist a government that becomes increasingly more repressive, impatient with any who are “different.”

The story follows one small family who cares about neglect of the planet. Robin, nine years old, is often frustrated, hurt and angry, bursting with observations and questions even while determined to understand and follow in the footsteps of his activist mother who died when he was seven. Theo, an astrobiologist, raises the boy on his own, distraught over his many parenting errors. Classmates consider Robin “weird” with teachers urging medication and treatment: “I never believed the diagnoses the doctors settled on my son…. The suggestions were plentiful, including syndromes linked to the billion pounds of toxins sprayed on the country’s food supply each year…. Oddly enough, there’s no name in the DSM for the compulsion to diagnose people.” Theo cannot imagine “Robin toughening up enough to survive this Ponzi scheme of a planet.”

After the school suspends Robin for punching another child, Theo takes the boy on a camping trip in North Carolina where he and his wife had honeymooned. And he makes plans to enroll the boy in experimental treatment, similar to biofeedback, using recordings provided by various human subjects including his mother. Over the weeks, Robin absorbs her intelligence, ambition, cheerful optimism and unlimited empathy for all living beings, no matter how small, including “systems of invisible suffering on imaginable scales.” Robin increasingly speaks out for the planet and voices her concerns in eerie ways. At one point Robin tells his father “there’s no point in school. Everything will be dead before I get to tenth grade.” The father concedes that the “Decoded Neurofeedback” was changing his son “as surely as Ritalin would have. But then everything on Earth was changing him. Every aggressive word from a friend over lunch, every click on his virtual farm, every species he painted, each minute of every online clip… there was no ‘Robin,’ no one pilgrim in this procession of selves for him ever to remain the same as.”

The pronounced progression, similar to that of the experimental subject in Flowers for Algernon, unnerves Theo. He worries about Robin getting along in a world where so many “lived as if tomorrow would be a clone of now” and understands “In the face of the world’s basic brokenness, more empathy meant deeper suffering.”

Robin sees too clearly that humans collectively are “breaking the whole planet” and “pretending they aren’t.” He tells his father, “Everyone knows what’s happening. But we all look away.” Yet Theo suspects that resistance may be impossible against the billions who bask in delusions and can only conclude, “Oh, this planet was a good one.”

The book is reminiscent of Interruptions, about a twelve-year-old boy. Gavan is well-read and full of questions about the world, tolerating neither hypocrisy or assertive ignorance, and teachers urge the parents to put the boy on Ritalin. His mother, while admitting that the boy has a knack for finding trouble, vehemently resists. Gavan convinces his best friend to skip school and follow a project engineer into the forest, hoping to collect evidence that might stop construction of a cross-island road. A brutal murder follows, and mother and child work separately and at cross purposes to expose secrets about an unnecessary road that would forever change the character of their Alaskan community.

Some children point out the obvious. “As children grow up, the memories and stories of childhood become myths. The details shape a child’s life, providing motivation, hope and comfort as life grows more complicated.”