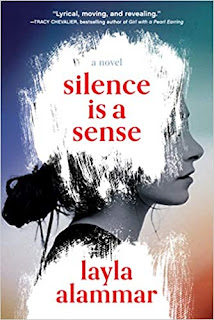 “No one is truly voiceless, he whispered, either they silence you, or you silence yourself.”

After fleeing Aleppo and enduring a traumatic journey separate from her family, a young Syrian woman lives in a London apartment from which she observes daily routines of her neighbors. She does not speak and embraces privacy, an instinct for self-preservation.

Silence Is a Sense by Layla Alammar reflects the constant comparisons and contradictions of the refugee experience – the comfort and annoyances of tradition, the discoveries and puzzles of another culture, the curiosity and ignorance and assumptions of new companions, the guilt over fleeing one’s homeland, doing anything to survive and not knowing what happened to those left behind. Tyrants, whether in Syria or London or Kabul, fear comparisons. As observed by the protagonist of Fear of Beauty: “Those who prefer continuity avoid comparison and regard any hint of choice as criticism. New interpretations from others might twist opinions in unknown ways.”

The protagonist writes her thoughts as a refugee for a small newspaper, under the pseudonym “Voiceless.” She initially resists the editor’s requests for more memories and experiences. “Everybody here wants a story,” she notes. “They all want stories – how did you get here? How long did it take? How easy was it to process your papers? … They want to hear about the hardship and the struggles and the people who died along the way.”  She worries that her more liberal-minded editor and readers have an agenda, wanting “to see, in me, all the hopes and ills and frustrations and struggles and singular stories of some five million plus people. They want me to speak for the chaos of the world…” She finds that “The human need for stories is itself an obstacle to memory. Like our dreams, we are not content with images or scenes or fragments of sensory stimuli… We try to place these elements within a structure that makes sense, wading back through fragments, trying to stitch it all together into a coherent pattern – a beginning, a middle, and an end.”  Stories are never so easily completed, and the protagonist feels “persecuted by the things I remember and by what my mind chooses to hide from.” She suspects that the most common routines may have been forgotten or blended into one memory: “It seems to me that complicit in the very idea of memory is actual forgetting.”

Memories meant to be cherished are reviewed over and over again until they become rote, over-practiced even while blending with new awareness and perspectives. Efforts to vanquish the most horrific memories, piercing again and again with renewed vigor, are useless. All shape her character, and she embraces literature and poetry, such as that of Edgar Allen Poe, because “There is someone out there who has been gripped by fear and loathing as I have.” Emotions may take precedent over actions in the most enduring memories, and it may be possible that life's most beautiful moments escape notice, failing to be preserved by memory.

London is supposed to be safe, but refugees confront discrimination and hatred, and the character expresses pessimism about the naïve notion that education might overcome hatred, an error “repeated on the news, in op-eds, in documentaries, in social media posts. There’s this idea that if only you bombard bigots with enough facts and data and statistics, you can cure them.”  The problem is not lack of education, she maintains, but “fear of the unknown, the Other, fear that things are changing in ways he can’t predict or control.” Of course, change is inevitable for any society, with or without refugees.

The protagonist finds that memories presented as stories lure “the public into caring about things and Others they might not otherwise care about.” Stories carry listeners to other places, helping them understand other cultures and perspectives, and thus do “make migrants of us after all.”

Some of the most powerful stories go untold. They might be too unbelievable or, in this case, a writer is “terrified that a story will diminish the real, that it will cheapen the experience beyond what I can bear.” The protagonist cautions others to examine the gaps in many tales, the questions that no one asks and the answers that remain hidden inside another person: “That’s where the story is.”