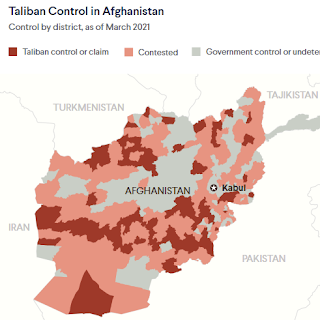 The United States is withdrawing from Afghanistan and the Taliban is determined to take control. The extremist group does not represent the majority will in Afghanistan, yet its members apply brute force and ruthless religious extremism to bend communities to their will. Many fear the Taliban could succeed with up to 85,000 full-time fighters, compared to the Afghan government's 180,000 troops, trained by US forces.

Asia Foundation surveys also report that public support for the Taliban and other armed opposition groups has dwindled, dropping from 50 percent in 2009 to 13.4 percent in 2019.

Various studies have suggested small groups can overturn established norms by reaching a critical mass of anywhere from 10 to 40 percent, with the required level varying depending on circumstances. A University of Pennsylvania professor pointed to 25 percent as a “likely tipping point at which minority views can overturn majority ones.”

Of course, the constant threat of violence reduces that threshold.

The United States signed a peace agreement with the Taliban in February 2020 and the group agreed to peace talks with the Afghan government. Delays and ongoing violence hampered those talks.  Today, Iran hosted “the first significant talks in months between the Taliban and Afghan government representatives,” reports ABC News. But the Taliban continue to apply pressure to multiple provinces and key transportation routes. “The Taliban have made relentless territorial wins since April, when President Joe Biden announced that the last 2,500-3,500 U.S. soldiers and 7,000 allied NATO soldiers would depart Afghanistan."

An editorial in the Afghan Times expresses fury about the US rapid withdrawal and the prospect of civil war even as the Taliban advance and newer extremist groups like the Islamic State take advantage of the chaos.

Women and children have the most to lose, as the Taliban are expected to reinstate controls and eliminate education opportunities. Individuals must decide how to respond as Afghanistan fails to provide security. “Women have taken up guns in northern and central Afghanistan, marching in the streets in their hundreds and sharing pictures of themselves with assault rifles on social media, in a show of defiance as the Taliban make sweeping gains nationwide,” reports the Guardian.
One journalist in her 20s told the newspaper: “No woman wants to fight, I just want to continue my education and stay far away from the violence but conditions made me and other women stand up.” 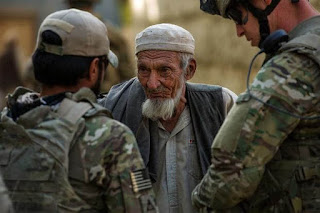 The United States must take immediate steps to evacuate interpreters and other Afghans who risked all in assisting US troops since the invasion in 2001, as described in Fear of Beauty and many other novels. With family members, this could total 50,000 people. “Our top priority should be getting through this red tape as quickly as possible…,” writes US Marine Corps veteran Michael Wendt for the Hill.

Map courtesy of Long War Journal and Council on Foreign Relations; photo of Afghan interpreter and US soldier interviewing a villager, courtesy of Military.com and USAF Staff Sgt Jonathan)