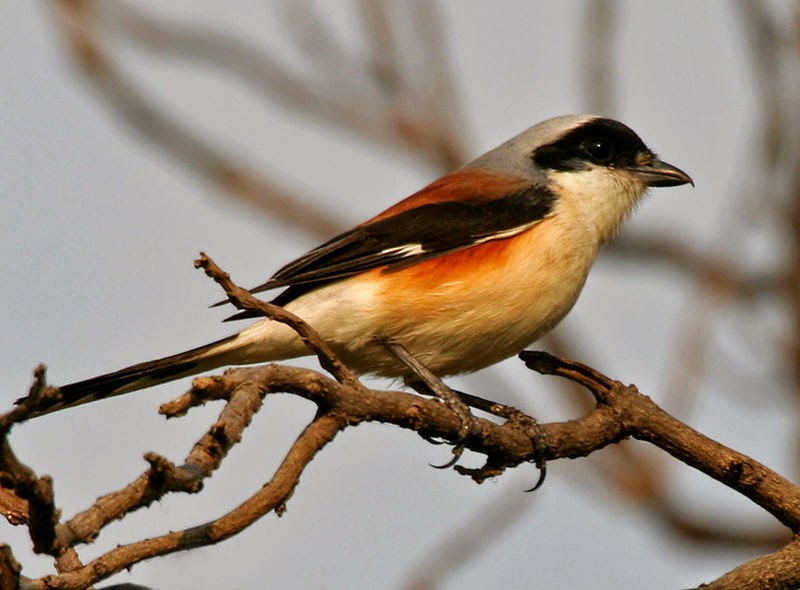 The shrike may have all the appearance of a sweet songbird, but it's a predator known for catching small birds or rodents, and impaling them on thorns or sticks for later dining. The eating behavior is described early in Allure of Deceit:

Parsaa did not let up swinging the scythe, carving gentle arcs into the field, the wheat falling in line on either side, while keeping his eyes on the shrike. Suddenly, the bir dove into a nearby section of uncut wheat and emerged with a plump mouse. Clamping its beak tight, the shrike returned to the edge area. Once there, the shrike took careful aim and impaled the mouse against a long thorn. Stepping back, the bird leisurely pecked at its writhing meal.

"With every swing of the blade, Parsaa was a co-conspirator.

Afghanistan has eight of the world's 31 species of shrikes. The one that appears in Allure of Deceit could be the bay-backed version, a bird that can be found in Afghanistan, India, Pakistan and Sri Lanka."A strikingly coloured, delicately built and fine-billed shrike, the bay-backed shrike is a beautiful bird of South Asia," notes Wildscreen Arkive. The colors include soft gray, warm chestnut with solid black markings. "The most distinctive feature of this bird is the black facial mask extending from the side of the neck through the eyes to the based of the hooked bill."

The Cornell Lab of Ornithology, a leader in the study and conservation of birds,  collects their songs and the bay-backed shrike can be heard here.

Photo of the bay-backed shrike in India, courtesy of J.M. Garg and Wikimedia Commons.